The U.S. Citizenship and Immigration Services (USCIS), which administers the nation’s immigration system, released a new version of Form I-9 for employers to verify the identity and employment authorization of their employees.

A Federal Register notice regarding the new Form I-9 was published on Jan. 31, and the USCIS began accepting the updated on the same day. Employers may use the previous form until April 30, 2020. After that date, they can only use the new form with the “10/21/2019” date (located in the lower left corner of the form).

This new version contains minor changes to the form and its instructions. The changes clarify who can act as an authorized representative on behalf of an employer, clarifies acceptable documents for Form I-9, updates the process for requesting paper Forms I-9, updates USCIS website addresses and updates the Department of Homeland Security privacy notice.

For more information, visit I-9 Central, or join a free Form I-9 webinar.

A plan designed to resolve California’s ongoing battle over funding and distribution of state milk quota payments will be publicly presented to dairy farmers on Feb. 11 during World Ag Expo in Tulare, California.

The recommendation follows months of study and meetings, led by dairy economists Marin Bozic and Matt Gould. Bozic will discuss the recommendation in the World Ag Expo VIP Event Tent, 11 a.m. to 2 p.m. Registration for the meeting is requested.

Under the proposed recommendation, California’s Quota Implementation Plan (QIP) sunsets on March 1, 2025. In the meantime, a regional quota adjuster (RQA) will be modified to result in an equalized quota differential of $1.43 per hundredweight (cwt). The plan will give existing quota holders a cumulative payment of $300 per pound of solids quota, distributed over the five-year period. The recommendation would require approval in a producer referendum.

California’s quota system came about in the late 1960s as a means of compensating milk producers selling into the higher Class I market. Under the system, the quota assessment on the pool reduced the overbase price received by all producers.

With California’s recent move into the Federal Milk Marketing Order (FMMO) system, a stand-alone QIP was approved in a statewide referendum in 2017. Under the FMMO, all Grade A producers are assessed the equivalent amount on their statement, whether they are pooled or not. Quota certificate holders receive payments above the state blend price for the amount of milk covered by their certificate.

Meanwhile, legal and administrative challenges to the QIP have grown. Last December, Stop QIP filed a lawsuit seeking to invalidate the QIP. Stop QIP has also initiated a petition drive calling for suspension of a section of the California Food and Agriculture Code (Chapter 3.5), which would effectively terminate the QIP.

Aligning links and logistics between Vermont’s small-scale dairy farms, processors and marketers could help propel the state’s agricultural industry into a viable and sustainable future, according to a report released in late January.

Mandated by state lawmakers in May 2019, the Vermont Agency of Agriculture, Food & Markets (VAAFM), the Vermont Sustainable Jobs Fund and Vermont Farm to Plate Network jointly presented the report in late January 2020. The report summarizes current conditions, bottlenecks and gaps, and opportunities of each segment of Vermont agriculture. Among the recommendations, the report’s authors urged a stronger link between small-scale milk and forage producers with specialty cheese manufacturers.

As of 2019, Vermont’s 664 dairy farms (470 conventional and 188 organic) produced about two-thirds of all milk in New England. Due to their size – more than 80% of all dairy farms milked fewer than 200 cow – Vermont dairy farmers face greater challenges trying to survive and thrive in conventional milk production and marketing systems. At the same time, the small, localized nature of the state’s dairy sector gives it greater capacity to innovate and evolve in concert with the ever-changing dairy market.

A second set of product, market and issue briefs are currently under development and scheduled to be released in late spring of 2020. The goal is to assemble a list of the highest priority recommendations – to be implemented over the next five years – by January 2021.

A survey of U.S. veterinarians shows that while most rate job satisfaction as high, many are concerned about stress levels, student debt and suicide.

Despite new awareness around well-being and mental health in veterinary medicine, the study showed veterinarian well-being on average has not improved since a similar study in 2017. “For example, this study found a significant and positive change in caring toward those with mental illness, but that there is still a large treatment gap, with half of those surveyed experiencing distress and declining to seek treatment,” said Judson Vasconcelos, DVM, director, Veterinary and Consumer Affairs for Merck Animal Health.

The study provided techniques and potential solutions to improve veterinary mental health and well-being. Individuals are encouraged to create personal stress management plans, balance their work with healthy personal activities, work with a financial planner especially if carrying a burdensome level of student debt and limit time on social media in favor of in-person interactions.

The Wisconsin attorney general’s office has filed a complaint against the owner of a Wisconsin cheese company, alleging theft of about $21,000 from 83 dairy farmers.

The complaint alleges that Moran forged the names of farmers on underpayment checks for milk and converted the funds for his own use or the use of others. According to the complaint, the theft occurred between January 2012 and April 2018.

A guilty verdict carries a potential maximum sentence of up to 10 years imprisonment and a maximum fine of $25,000.

The FDA's failure to prevent use of dairy terms on labels of plant-based alternative products makes it imperative that Congress pass the DAIRY PRIDE Act, National Milk Producers Federation (NMPF) Executive Vice President Tom Balmer told a congressional subcommittee on Jan. 29. Balmer testified at a hearing on “Improving Safety and Transparency in America’s Food and Drugs” before the House Energy & Commerce Committee’s Subcommittee on Health.

The Defending Against Imitations and Replacements of Yogurt, milk, and cheese to Promote Regular Intake of Dairy Everyday (DAIRY PRIDE) Act was introduced by U.S. Reps. Peter Welch (D-Vermont) and Mike Simpson (R-Idaho) in the House and Sens. Tammy Baldwin (D-Wisconsin) and Jim Risch (R-Idaho) in the Senate. The proposal would designate foods that make an inaccurate claim about milk contents as “misbranded” and subject to enforcement of labeling rules. It would require the FDA to issue guidance for nationwide enforcement of mislabeled imitation dairy products within 90 days of its passage and require the FDA to report to Congress two years after enactment to hold the agency accountable in its enforcement.

Despite a pledge from newly confirmed FDA Commissioner Stephen Hahn in support of “clear, transparent and understandable labeling for the American people,” the FDA has failed to take enforcement action against mislabeled products, Balmer said.

The Aemetis Central Dairy Digester and Pipeline Project is designed to capture methane gas currently emitted from dairy manure lagoons, pretreat the biogas at each dairy to remove harmful components, then transport the methane via pipeline to the biogas upgrading facility.

The biogas upgrading facility will convert dairy biogas, collected from dairies throughout Stanislaus and Merced counties in California, into renewable natural gas (RNG). Aemetis is currently developing more than a dozen anaerobic digesters at local dairies, with plans for future expansion to several dozen dairies.

Aemetis expects to complete construction and begin operation of its first two dairy digesters, the onsite dairy biogas pretreatment units, a 4-mile Aemetis pipeline and a new biogas boiler at the Keyes plant in the second quarter of 2020.

The RNG will be utilized at the Keyes ethanol plant to replace carbon-intensive petroleum natural gas currently used to generate steam and power at the plant or will be injected into Pacific Gas and Electric Company's (PG&E) gas pipeline to be utilized as transportation fuel by trucking companies and bus fleets.

The number of U.S. farms restructuring debt by filing Chapter 12 bankruptcy rose in 2019, according to analysis by American Farm Bureau Federation (AFBF) chief economist John Newton. There were 595 Chapter 12 filings for the year ending Dec. 31, 2019, up 97 (20%) from a year earlier and the highest annual total since the 637 filings in 2011.

Among the 24 major dairy states, Chapter 12 filings totaled 398 for the year ending Dec. 31, 2019, up 71 from the year before (Table 1). The total does not necessarily mean all filings were dairy operations, however. 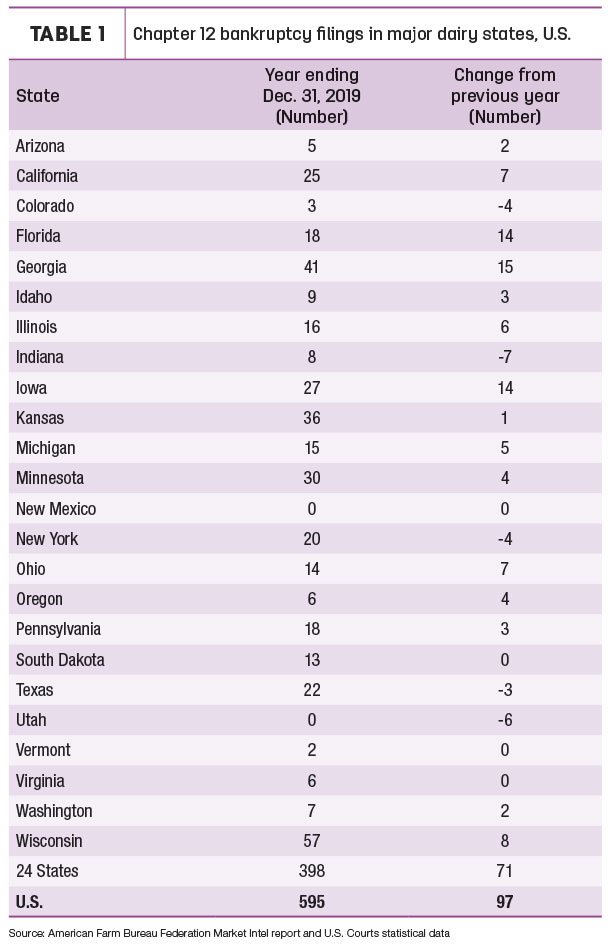 At 57, Wisconsin farm Chapter 12 bankruptcies were up eight from the prior year and the highest level in a decade. Other dairy states setting decade highs were Georgia, Iowa, Illinois, Kansas, Minnesota, Ohio, South Dakota and Vermont.

”The continued increase in Chapter 12 filings was not unanticipated given the multiyear downturn in the farm economy, record farm debt, headwinds on the trade front and recent changes to the bankruptcy rules in 2019’s Family Farmer Relief Act, which raised the debt ceiling to $10 million,” Newton wrote in his AFBF Market Intel report.

Among other highlights of Newton’s report:

For additional information, read: The Verdict Is In: Farm Bankruptcies Up in 2019.

U.S. Gain has purchased an anaerobic digester located at Deer Run Dairy LLC, near Kewaunee, Wisconsin. According to the company’s press release, U.S. Gain is currently coordinating the installation of biogas cleanup equipment to produce RNG.

RNG is not a fossil fuel but can be used interchangeably with traditional natural gas. Dairy-based RNG features some of the lowest carbon intensity scores because of its upstream emission savings through capture of methane that otherwise would have been released into the atmosphere, the company said.

Once certified, the gas will be injected into the natural gas pipeline and distributed throughout their GAIN Clean Fuel network, private natural gas fueling stations and other nontransportation outlets.

As a part of U.S. Venture Inc., a family-owned, Wisconsin-based company, U.S. Gain develops, procures and distributes renewable and compressed natural gas for the transportation and energy industries.

Danone North America announced a partnership with rePlant Capital, a financial services firm dedicated to reversing climate change. Under the partnership, rePlant will provide up to $20 million in loans to support Danone North America’s farmer partners with expenses related to converting to regenerative or organic farming practices.

The first of the loans has been provided to Kansas-based McCarty Family Farms, a partner of Danone North America for almost 10 years and co-owner of MVP Dairy LLC, winner of the International Dairy Foods Association 2020 Innovative Dairy Farmer of the Year award.

McCarty family farm owners and fourth-generation dairy farmers Mike, Clay, David and Ken McCarty will use the loan to install moisture probes on cropland surrounding their dairy, where water access issues are of concern, to reduce the amount of water used on crops that provide forage for the dairy cows. In addition to reducing water usage on their own farm, McCarty Family Farms is working with their local feed partnerships as well as the local watershed authority to see how this program may be expanded to other farms in the region to improve water consumption and aquifer longevity within the Ogallala aquifer.