While curb appeal is certainly one reason to keep things tidy, Doug Grotegut also finds value in a good spring fan cleaning to maximize ventilation efficiency and cow comfort in their cross-ventilated barn. “The aesthetic side is important,” Grotegut says, “and it provides a cleaner environment for the cow too.”

Grotegut Dairy used to take on the task themselves of washing 135 6-foot-wide exhaust fans, but they now outsource the job to Les Schmidt, Schmidt Exterior Cleaning, of Greenleaf, Wisconsin. Each spring, Schmidt spends about two days at the dairy. The fan louvers are removed and cleaned on both sides, and the inside and outside of the housing is cleaned as well. While the fans are disassembled, the dairy’s maintenance crew performs necessary belt-tightening, greasing and other upkeep and repairs. 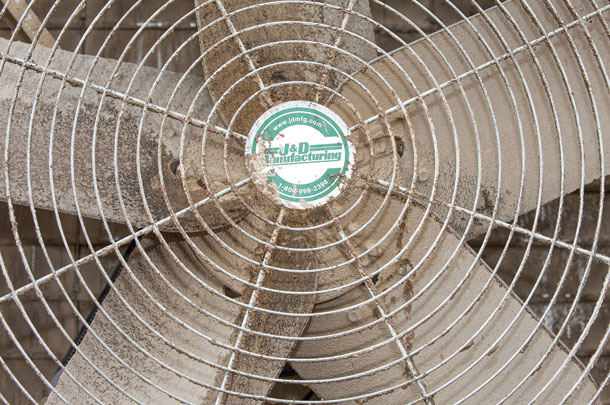 Interior baffles are also washed. When this is done, tarps are used to cover the stalls and protect the dried manure solids bedding from extra moisture. Schmidt returns for a second fan cleaning late in the summer to remove the layer of dust and dirt accumulated from heat stress season, when fans were running at their highest capacity. 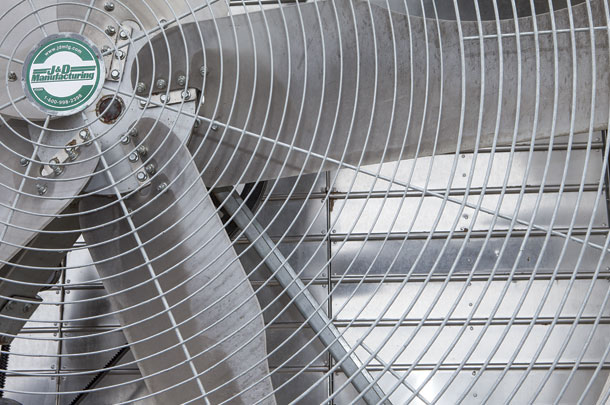 Getting up to speed

There’s a good chance Grotegut is right. According to Wisconsin Energy Efficiency and Renewable Energy (a division of University of Wisconsin Extension), dirty shutters alone can reduce fan output by 40 percent. For a simple example, Schmidt explains, “If you have 10 fans, and they are 40 percent less efficient, it takes all 10 fans to get the barn down to 60 degrees. If you are 40 percent more efficient, you are only running six fans instead of all 10 … and only paying the electricity on those six fans to do the same thing.”

A layer of grime on blades not only leads to additional operating costs, but it compromises cow comfort too. In cross-ventilated and tunnel-ventilated barns particularly, dirt can inhibit the delivery of ideal air speeds when cows need it most. Schmidt says dairies often have the goal to provide a consistent 5- to 7-mph breeze in the barn, yet when he uses an anemometer to actually measure air speed, many fall short. One dairy in particular was operating at just 2.6 to 2.8 mph but, after washing fans, was up to 5.9 to 6 mph. “Cleaning doubled their air speed,” Schmidt adds.

This is because even a small amount of dirt can cause enough friction to inhibit optimal air flow. “Dirt is like sandpaper. If you rub your hand across a smooth surface, it will slide. If you run it across sandpaper, there’s friction,” Schmidt explains. “Dirt on fans acts the same way.”

Creating a culture of cleanliness

Beyond the benefits of fan efficiency, dairyman Jon Lamers sees a bigger-picture value in giving the fans and interior of his tunnel-ventilated barn a good washing twice each year. He believes attention to such details demonstrates the mindset he strives to promote on the 1,300-cow dairy he owns in partnership with his father, Denis Lamers, near Kaukauna, Wisconsin. 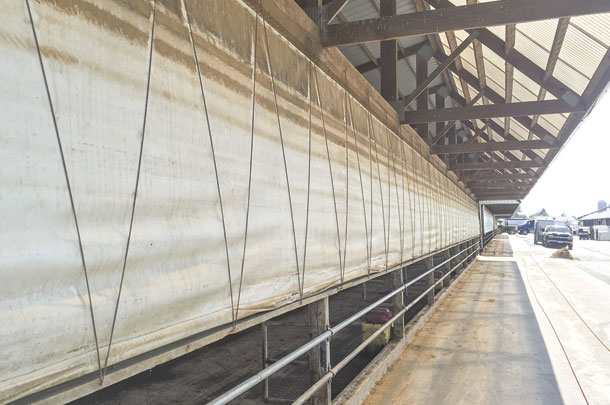 “It’s part of the culture at the dairy here,” Lamers says. “How things look and how we take care of things sets expectations for anyone who comes in the driveway, whether it’s an employee or a vendor we work with.” 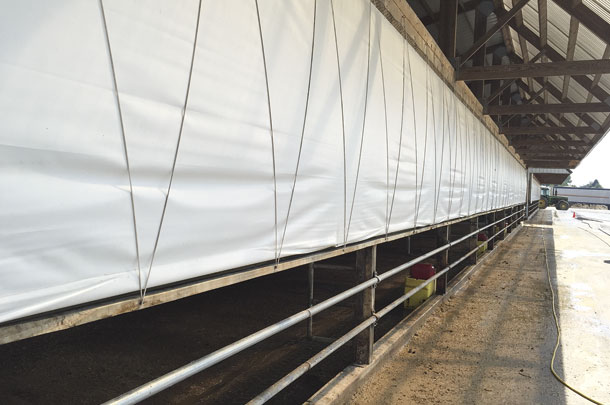 Keeping things clean, including the barn and fans, is just one of many efforts that set the tone for what’s expected at Seven Oaks Dairy. “If we demonstrate it’s important to keep the fans and things in the barn clean, then it carries over to other parts of our dairy, like keeping milking equipment clean,” Lamers adds. “Keeping things cleaned and looking maintained leads to a positive environment on our dairy.”

What about the roof?

In addition to the fans and interior, Lamers employs Schmidt to wash the barn roofs. The roof was first washed nine years after it was built, and the visual difference “was amazing,” according to Lamers. He plans to continue having the roof cleaned every few years to remove the layer of dirt, black mold and organic matter that accumulates on the surface. 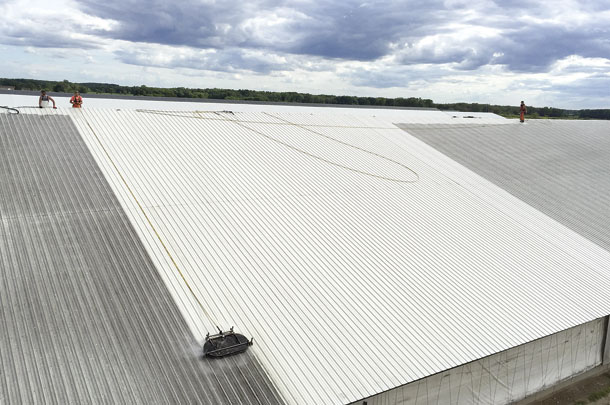 Some dairies may also realize heat abatement benefits from washing rooftops. Schmidt points out many barns are built with white roofs in order to reflect the sun’s heat. However, the buildup can turn a white roof gray or even black, thus absorbing heat. Depending on the level of insulation, Schmidt estimates this could translate to a 5- to 10-degree difference inside the barn.

While little research has been done on how routine roof washing affects the life of dairy buildings, Schmidt speculates the removal of molds and buildup prevents corrosion and therefore keeps the structure intact longer. He suggests an experienced professional be brought in to do the job, as rooftops present a high risk for injury.

Spring is the ideal season to give the barn a thorough cleaning, inside and out. In addition to fans and roofs, Schmidt reminds dairy producers to also clean curtains and baffles. While some dairies take on these tasks with their own employees and equipment, others find it more efficient to hire an outside service with specialized equipment to come in and get the job done. Either way, a clean barn is worth the investment.

PHOTO 6: Barn roofs accumulate dirt, dust and organic matter. Once restored to its original color, a clean, white roof will reflect more heat than a dirty one, thus, attributing to a cooler, more comfortable cow environment. Photos by Leslie Schmidt.