Ask a Vet: How to place an IV catheter

Vicky Lauer
Intravenous (IV) fluids are the fastest and most effective way to reverse severe dehydration in a calf, and an intravenous catheter allows for extended fluid therapy.
Vicky Lauer 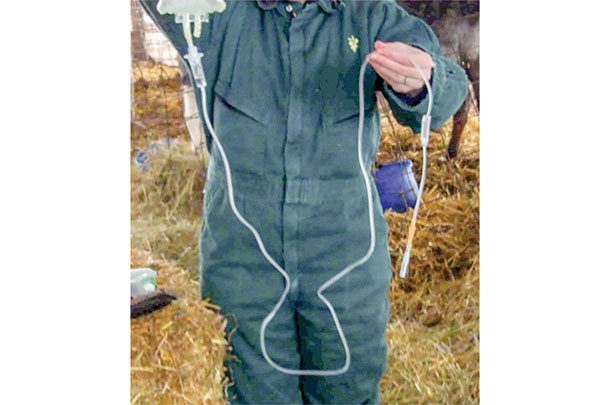 1. Lay the calf down with its feet facing away from you.

2. Find the jugular vein (toward the bottom of the neck between the spine and the windpipe).

3. Clip and brush off the hair 3 inches above and below the vein from the jaw to the brisket.

4. Scrub the clipped area with chlorhexidine scrub using a gauze pad or paper towel. Start at the center of the vein and move outward.

6. Inject 1 milliliter of lidocaine under the skin directly over the jugular vein where you want to place the catheter. Start closer to the head initially so if the first try is unsuccessful, you can move farther down the neck. Lidocaine will make a lump that obscures the vein. (Steps 6 and 9 are optional.)

9. Use a scalpel to make a small incision through the entire thickness of the skin where you injected the lidocaine. Always pick up the skin before you cut so you don’t puncture the vein.

10. Pick up the catheter, being sure to only touch the clear plastic on the end. Never touch the white part. If you do, discard the catheter and get a new one. The catheter should remain as close to sterile as possible.

11. Holding the catheter at a 45-degree angle to the skin, poke through the skin where you made the incision.

12. Block off the vein and slowly advance the catheter until you see blood in the catheter.

13. Bring the catheter almost parallel to the skin and slowly advance it about a quarter of an inch. Blood should flow from the catheter. If blood stops flowing, back up until blood starts flowing and try advancing less this time.

16. Screw a catheter cap onto the end, being careful not to move the catheter.

17. Carefully pick up a fold of skin directly underneath the catheter and push a 16-gauge needle through both sides. Leave the needle in place.

18. Thread suture through the needle.

19. Remove the needle, leaving the suture in place.

20. Wrap the suture around the middle of the colored part of the catheter behind the tab and tie three to four knots to keep the catheter in place.

22. If fluids aren’t being administered but the catheter will be left in place, flush the catheter with heparinized saline three to four times a day to keep it from clogging. It can remain in place two to three days with proper care.

PHOTO 1: Intravenous (IV) fluids are the fastest and most effective way to reverse severe dehydration in a calf.

If you’re uncertain on how to proceed, ask your veterinarian to demonstrate the procedure.