Over the last 25 years, animal production has improved significantly to have more milk and meat production per animal. To support our ability to feed and manage modern animals, technology to better analyze feed ingredients has also changed to keep up with production. Feeds are more thoroughly analyzed today than they were before, allowing feeds to be utilized to their full potential. Although the layout of reports may be different between laboratories, the various parameters required for nutritionists are included in most feed analysis reports. In the subsequent paragraphs, I will describe the type of information found in a feed analysis and what it means.

Every report will include the dry matter of the feedstuff. The reason for obtaining the dry matter is because moisture dilutes the concentrations of the nutrients present, and it is standard practice to evaluate the feed and balance rations using a dry matter basis.

Crude protein (CP) is a term well-known among producers and is calculated based on the nitrogen content of the feedstuff. Without looking at the type of protein it is made up of, it doesn’t tell us more than that it contains nitrogen, including both true protein which contains amino acids (the building blocks of protein) and non-protein nitrogen. The report generally splits this CP parameter down further into soluble protein, acid detergent fiber-CP (ADF-CP), neutral detergent fiber-CP (NDF-CP) and undegradable intake protein (UIP), also known as bypass protein. To appreciate the values of each on the analysis report, a basic understanding of these terms is needed.

Looking at Figure 1, the green wall on the left represents the total CP portion of a forage analysis. 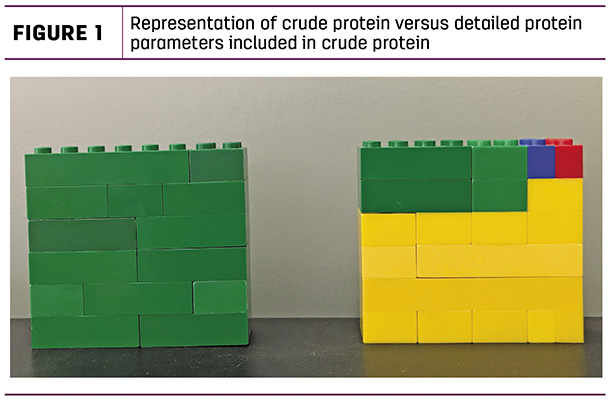 By looking at that image, it doesn’t appear to be any more than just one of the same proteins. However, when we look at the image on the right, we can see the same amount of CP can be broken up into more parameters. Because of laboratory analysis, we know how much on average each of the other parameters represent of the total CP. The yellow bricks now show the portion of soluble protein, the green bricks represent the undegradable intake protein (bypass protein), and the blue and red bricks show the NDF-CP and ADF-CP, respectively.

Soluble protein is most readily available to animals. This consists of small amino acid chains that will solubilize in rumen fluid and be absorbed across the rumen wall. Soluble protein is the same whether you look at the “as-fed” or “dry matter” columns on the analysis results because it is a percentage of the total CP. The bypass protein is the fraction of protein resistant to degradation by rumen microbes. This fraction goes by a couple of other names, like undegradable intake protein (UIP) and rumen-undegradable protein (RUP). It is valued because it bypasses the rumen and can then be absorbed in the small intestine.

Acid detergent fiber (ADF) refers to the cell wall portion of the forage and is made up of lignin and cellulose (the outer layer of the cell wall). The value is important as it relates to the ability of an animal to digest the forage; a higher ADF suggests a decrease in digestibility. Neutral detergent fiber (NDF) refers to the cell wall fraction that includes ADF and hemicellulose (which is the inner cell wall). The NDF value is related to the amount of forage the animal can consume, and as NDF increases, the dry matter intake generally decreases. Lignin, as shown in Figure 2, located between the outer and inner cell wall, is the indigestible portion of the plant cell. 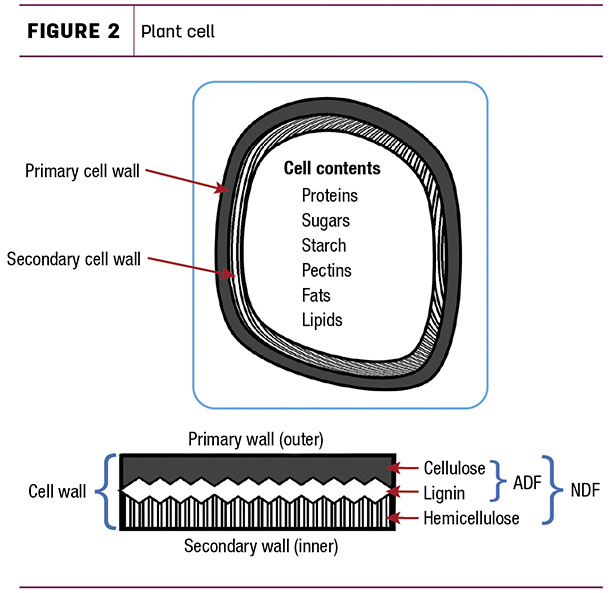 Think of it as a glue stick sitting as a pillar between the inner and outer wall, holding both together. This number will increase with the maturity of the forage, and therefore negatively affects the digestion of the cell wall by acting as a physical barrier to the microbial enzymes.

The ADF-CP is associated with the portion of the CP unavailable to the animal as a result of heat damage. In forages, this can be natural heating of fermentation, whereas for some feed ingredients, such as distillers grain, it is the actual heating process. Elevated values of ADF-CP indicate overheating has occurred and could mean potential reduction to the feed quality, making less feedstuff usable to the microbes and thus to the animal.

NDF-CP is similar to ADF-CP, wherein it has some digestibility associated with it. Usually, the NDF-CP is linked to bypass protein, meaning that as NDF-CP increases, the more bypass protein you will have.

Along with NDF, some reports present an aNDF value, where the “a” indicates amylase, an enzyme, used for the NDF procedure to remove any starches. The next extension to that is the aNDFom, where the NDF is “ash-corrected.” It differs from NDF and aNDF in that it is free of ash. The ash content is related to the amount of soil picked up during harvest. The sample is heated, leaving a residue of ash. The ash is then weighed and subtracted from the NDF portion, giving the “ash-free” NDF, or aNDFom. 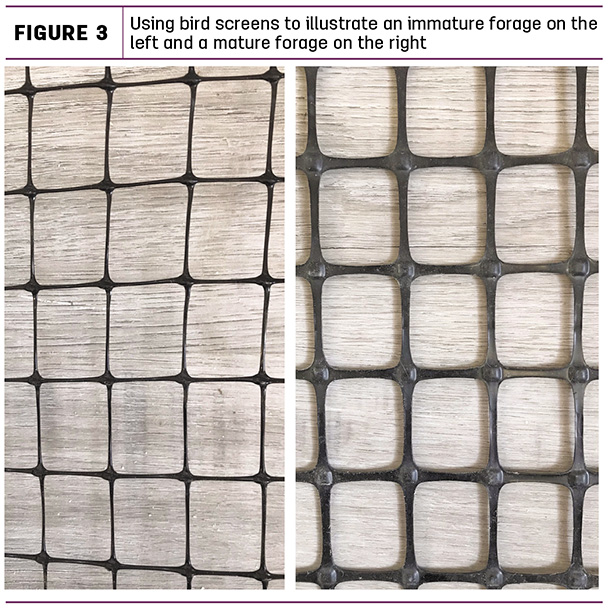 Depending on what company creates your analysis report layouts, results will be slightly different. Growing seasons, timing of manure or fertilizer application, harvesting methods, and timing and harvesting technique will all affect the nutrient availability of forages. Laboratories do update technology and continue to do their best to calibrate equipment; however, small variations may occur. Nevertheless, plenty of reliable information is available for a given sample to aid in precise feeding, allowing nutritionists and producers to meet the nutritional demands of the animal.