The USDA released its latest Ag Prices report on June 30, including factors used to calculate the May DMC margin and potential indemnity payments. The May DMC margin is $12.51 per hundredweight (cwt), above the top Tier I insurable level of $9.50 per cwt (Table 1). It’s up 21 cents from the April margin and the highest since November 2014. 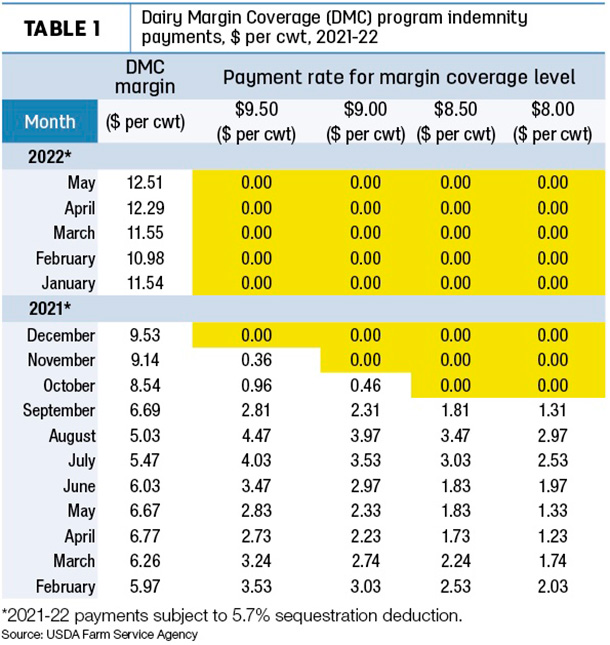 May milk prices were higher than the month before in 16 of 24 major dairy states, down in three (Illinois, Indiana and Pennsylvania) and unchanged in five (Table 2). Monthly average milk prices topped $29 per cwt in four states: Florida, Georgia, Oregon and South Dakota. Largest month-to-month increases were in California and Florida, each up 50 cents per cwt. 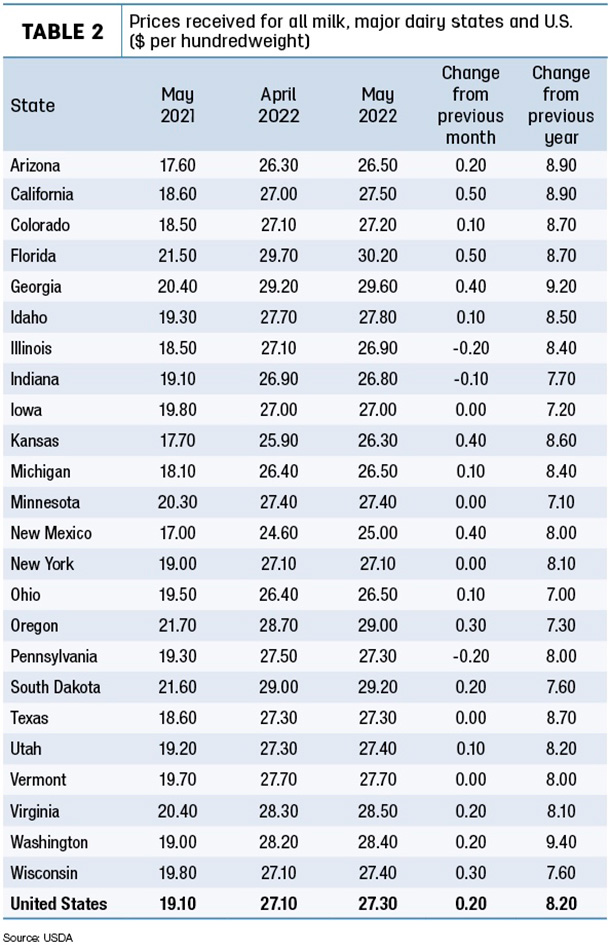 The highest prices were in Florida and Georgia, at $30.20 and $29.60 per cwt, respectively. New Mexico was the only state where the April average price was less than $26 per cwt.

While the news was again good on the milk income side of the ledger, total feed costs remained near last month’s record, supported by prices for corn and alfalfa hay (Table 3).

May feedstuff prices yielded an average DMC total feed cost of $14.79 per cwt of milk sold, down 2 cents from April but still the second-highest total during the DMC or MPP-Dairy era dating back to March 2014.

Those higher prices for fuel and other inputs weigh heavily on farmers, notes Shelby Myers, economist with the American Farm Bureau Federation.

U.S. average retail gasoline prices hit a new high, rising above $5.006 per gallon in June, according to the U.S. Energy Information Administration. This was up 63% compared to the same week in June 2021 and was nearly two times higher than the five-year average price of gasoline before 2020 when COVID lockdowns pushed gasoline demand way down.

Diesel prices rose to $5.718 per gallon in June, up 74% compared to June 2021. The current high price of diesel is more than two times the five-year average price paid before 2020.

Based on USDA estimates, fuel represented about 3% of total on-farm expenditures in 2020. Latest USDA cost of production data estimates that the cost of fuel, lube and electricity combined is projected to increase 34% in 2022 compared to 2021, after just a slight cost reduction, decreasing 1% from 2020 to 2021.

A glimmer of hope for farmers is the USDA’s estimate that the price of fuel may decrease about 18% in 2023 compared to 2022, but these projections are very early and there is significant uncertainty.