Clayton Stoffel
Given this year’s uncertainties surrounding fertilizer, fuel and freight, one thing is certain – the feed bill will be going up. To prepare for a scenario where ingredients are expensive and potentially hard to come by, many producers and nutritionists are taking a hard look at rations and evaluating what can be removed.
Clayton Stoffel

Some may opt to pull back on purchased feeds like soyhulls in favor of homegrown alfalfa silage or switch from steam-flaked corn to dry ground corn. While this strategy focuses heavily on cost, a more effective way to maximize the value of the total mixed ration (TMR) is to prioritize nutrient digestibility and ensure cows are making the most of every bite.

What is total tract digestibility?

Total tract digestibility estimates the absorption of a nutrient through the digestive tract. It is often applied to nutrients such as neutral detergent fiber (NDF) and starch, but it can also be used to assess other nutrients including protein, fat and organic matter.

The analysis is conducted by collecting TMR and fecal samples from the cows in question and analyzing them both for the nutrient of interest and a marker. Commonly used markers are lignin and, more recently, undigestible NDF (uNDF 240 or uNDF 120). Knowing the concentration of the marker in the feed and feces is important because it establishes a relationship between intake and excretion. We can then use this relationship to account for intake and excretion without knowing the exact volume of feed consumed or manure produced. The equation to calculate total tract digestibility (in this example, starch) is:

Total tract digestibility does have its limitations. Applying it to nutrients such as fat and protein can be more challenging than starch and NDF because cows can synthesize these nutrients in their bodies. What is excreted in the manure may come from both the feed and what is synthesized in the cow. This would result in digestibility being underestimated. Additionally, it is difficult to sample TMRs accurately.

Collecting multiple representative samples is recommended to help alleviate some of this sampling error. The turnaround on this analysis can also be lengthy due to the required incubation time (up to 10 days) for the uNDF marker. The time issue could be solved by utilizing near-infrared (NIR) analysis. However, some researchers have shown poor correlations between NIR and benchtop chemistry measurements of total tract digestibility. Caution should be taken when using NIR analysis to calculate total tract digestibility.

On-farm examples of use

Over the last several months, our company has pioneered an analysis which uses total tract digestibility measurements to help producers benchmark their herd against the rest of the industry. To date, 18 herds representing over 70,000 cows across the country have been sampled. The program uses data from Rock River Laboratory to set average and goal benchmarks for both starch and NDF digestibility.

In addition to benchmarking herds, total tract digestibility can be used to monitor the effects of dietary changes or additions. When products designed to enhance rumen function or support gut health are used, it can be difficult to see changes in milk or component yield amid the day-to-day variations on-farm. Assuming the product was effective, this can be due to the fact that cows partition nutrients where they are needed. Instead of using increased nutrients or energy to improve productivity, a cow may shuttle them toward reproduction, immune function or growth and body condition. Total tract digestibility allows us to peek inside the cow to see if a product or ingredient had an upstream effect on nutrient availability. 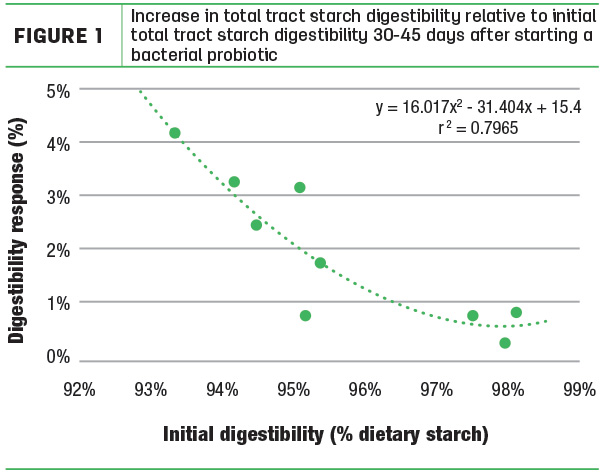 In these times of rising feed costs and decreased feed availability, it is vital to have confidence in all ingredients and products used in the TMR. Understanding nutrient digestibility can provide this assurance and be leveraged to help cows get as much value as possible out of each bite of feed. Strategically monitoring total tract digestibility of the TMR can be a valuable tool in accomplishing this goal.