How does age at first calving affect the bottom line?

Robert Fourdraine
Data show that earlier calving may result in less milk produced during the first lactation. However, by the time the cow reaches her third lactation, production levels are almost the same.
Robert Fourdraine

Recently a producer request arrived on my desk with this question, “What age at first calving should I target to achieve greatest profitability?” He explained that heifers calving at an earlier age seemed to produce less milk during their first lactation compared to those that calved later. So, are these heifers actually more profitable even though they produced less in their first lactation? With the plus and minus in production, is there an optimal age at first calving?

Age at first calving (AFC) has been a topic of frequent discussion. Improved calf management and nutrition coupled with a steady improvement in genetics for fertility, health and production have resulted in heifers that grow and mature faster. As a result, dairy farmers have been able to breed heifers at an earlier age. Even though breeding at an earlier age might be feasible, are there advantages and disadvantages of breeding heifers as early as possible, or should one wait longer? Production is one aspect; however, what about calving problems leading to higher culling rates and heifers leaving at an earlier age?

In this article, we will use data from Dairy Records Management Systems (DRMS) to find answers to these questions.

Using DRMS data from over 8 million first-lactation cows, Figure 1 provides a 10-year trend showing the average AFC for Holsteins and Jerseys based on year of calving.

From 2010 to 2017, for both Jerseys and Holsteins, there has been a reduction of about 25 days in average days at first calving. However, since 2017, these numbers have leveled out at approximately 727 days for Holsteins and approximately 715 days for Jerseys.

Averages don’t always tell the full story. When it comes to AFC, the distribution is also very important. A narrow distribution would mean more consistency and more heifers calving at the same age. A wider distribution could point at problems getting heifers bred. Figure 2 shows the distribution by month of calving for Holstein heifers that calved in 2011, 2016 and 2021. 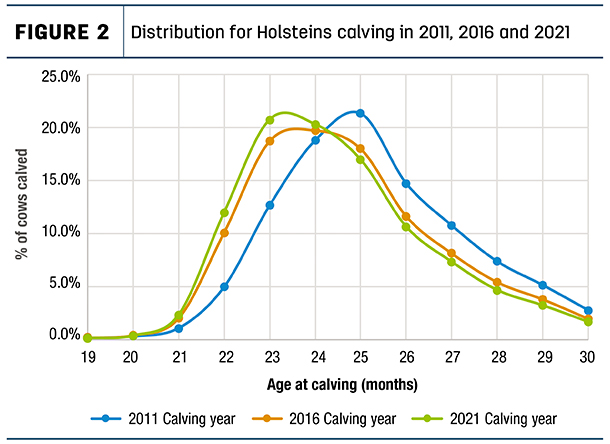 This graph clearly shows that the AFC distribution curves from 2016 and 2021 have shifted to the left of the 2011 distribution curve, meaning that more heifers are calving at an earlier age. However, the change from 2016 to 2021 is less pronounced, supporting the data in Figure 1 that AFC has leveled off in recent years. There is, however, a slight redistribution comparing 2016 with 2021: There are less heifers calving at a later age and a slightly higher percentage of heifers calving at 23 to 24 months of age.

To assess the impact of AFC on overall lifetime milk production, we need to consider more than the amount of milk produced in a single lactation. Using over 1.1 million DRMS lactation records, an analysis used data from cows that stayed in a herd for at least 5 years. Cows that lasted at least 5 years would typically complete 3 lactations. Data was split by breed and number of times milked (2X versus 3X). Cumulative milk production was evaluated and expressed as average milk per day of life (i.e., since birth) and average milk per day after first calving (i.e., entered milking herd).

Figure 3 shows how the first three lactations compare between heifers that calve at 21, 22 and 23 months, respectively. 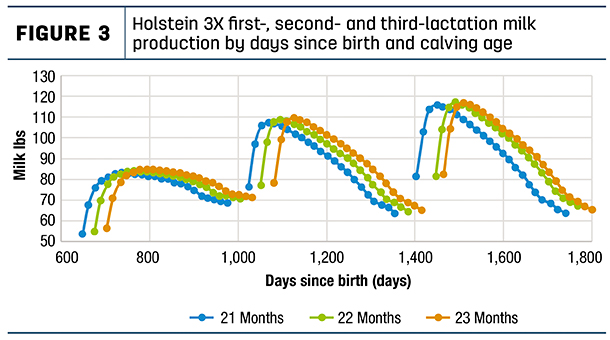 To evaluate lifetime impact, milk production is shown based on number of days since birth.

Based on the data in Figure 3, heifers that calved at 21 months produced milk 60 days earlier than heifers calving at 23 months. This advantage is maintained throughout subsequent lactations. The difference in production level in Figure 3 is somewhat hard to decipher, therefore the data in Figure 4 shows first-lactation milk production by days in milk. 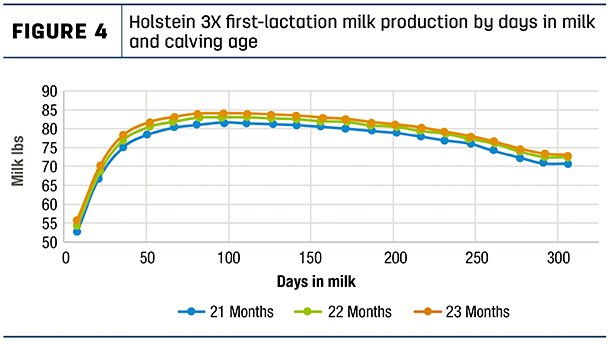 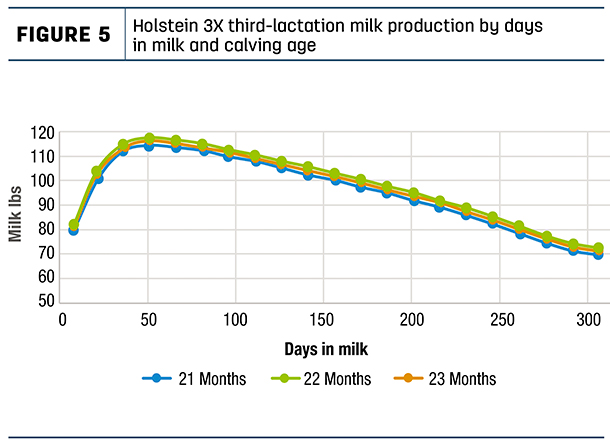 Based on the data shown, there is clearly a gain in earlier milk production but lower overall milk production, mainly in the first lactation. The question becomes: What is the net result? 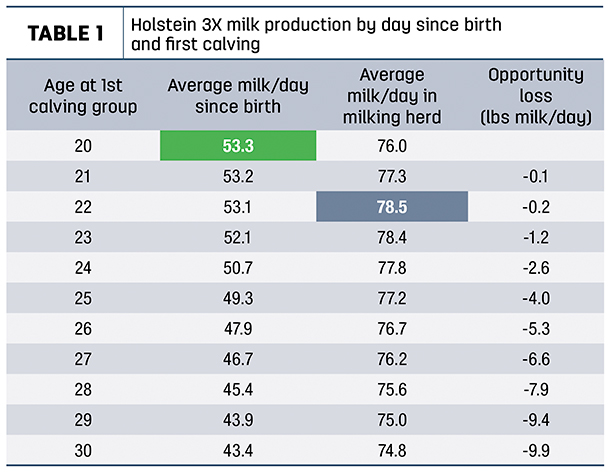 To evaluate long-term impact, average milk production was calculated for cows that have reached a minimum of 5 years old.

As shown in Table 1, Holstein 3X herds obtain the highest average milk per day in the milking herd at 22 months AFC (78.5 pounds, highlighted in blue). However, when expressed as average milk per day since birth, the maximum production is obtained at 20 months AFC (53.3 pounds, highlighted in green). Table 1 also shows the incremental loss in milk production per day since birth when compared to the optimum of 20 months. For example, on average, a Holstein 3X heifer calving at 25 months produced 4 pounds less milk per day of life by 5 years old when compared to a heifer calving at 20 months. Over a five-year period, this would add up to 7,300 pounds of milk lost opportunity per heifer calving into the herd. 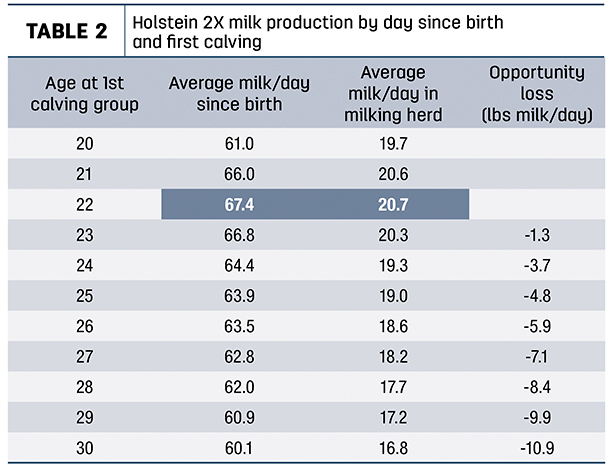 For Holstein 2X herds, there was no difference in optimum milk yield when comparing days since birth with days in the milking herd. In both cases, the optimum occurred at 22 months AFC. Similar to Holstein 3X cows, the milk opportunity increases for every month past the optimum age of 22 months.

To assess the economic impact of seemingly small differences in daily milk production resulting from lengthening AFC, the cumulative loss over five years as expressed in dollars of lost production can be quite significant. Using $18-per- hundredweight (cwt) milk, Figure 6 clearly shows that the maximum Holstein 3X revenue is reached when heifers calve from 20 to 22 months. 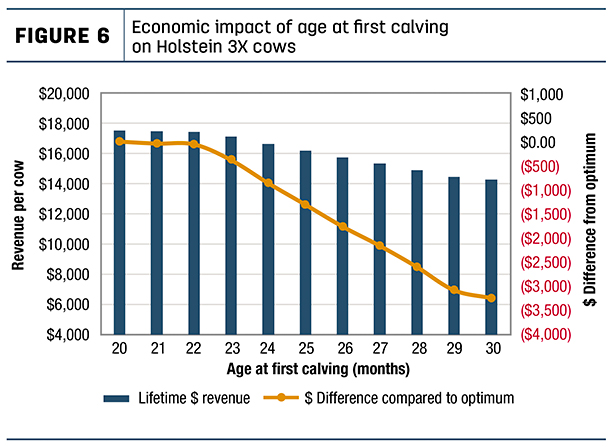 Once heifers calve later than 23 AFC, the five-year revenue drops for each additional month delay in calving. For example, using these results, an average heifer calving at 26 months compared to calving at 20 months of age (six months later) would produce $1,755 less revenue over a five-year lifespan.

Aside from the impact of age at first calving on lifetime milk production, it is important to evaluate whether there are negative impacts that may result from earlier calving. Most health-related complications would occur at calving and, depending on severity, could lead to higher culling rates. Utilizing DRMS culling data, we calculated the percent of animals that left the herd for involuntary reasons or died before reaching 300 days in milk. Figure 7 shows that Holstein 3X heifers calving between 20 and 22 months had the lowest culling rates, while those calving before 20 months of age showed a sharp increase in culling rates. 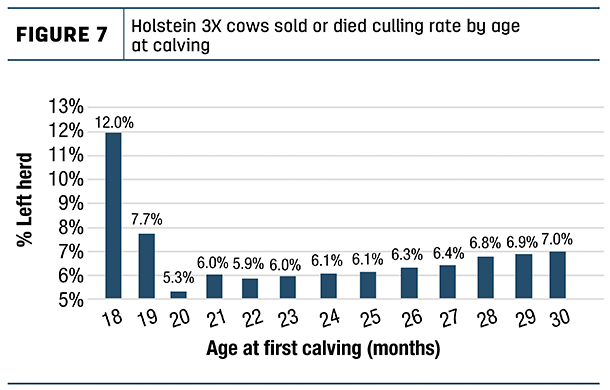 How is your herd performing?

Although these results indicate there is an optimal age at first calving, it is important to assess whether this is a feasible goal for your herd. A first step is to evaluate your current performance. DHI records coupled with a herd management program can be of great help to perform this analysis. As shown, average age isn’t the most important factor; it is actually the distribution of AFC. A narrow distribution of AFC indicates a consistent heifer management program. A wide distribution of AFC could have an important negative impact on your herd’s bottom line. The following example shows how you can use PCDart herd management software to evaluate your herd’s performance.

In Figure 8, the example herd milks 885 first-lactation cows and was targeting 22 months AFC. Based on the distribution, about 50% of the heifers calved past 22 months. 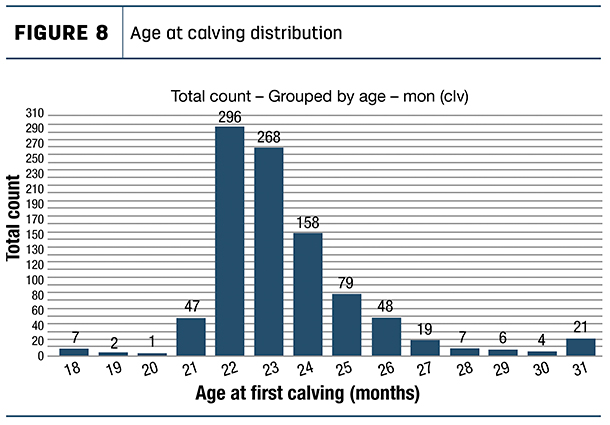 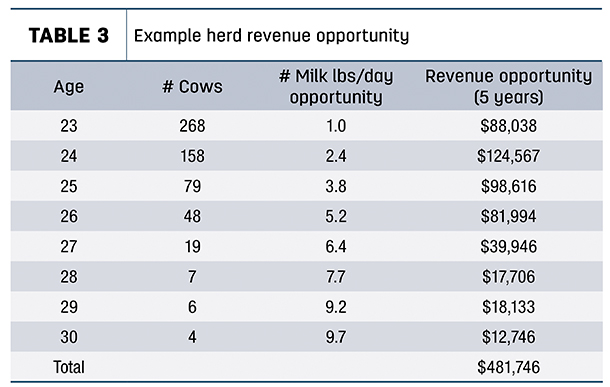 The combined five-year revenue opportunity for all heifers calving at 22 months is $481,746. However, it is unlikely for 100% of heifers throughout the year to calve at the targeted AFC. But for the example herd, 84 heifers calved beyond 25 months AFC – three months late. The opportunity to improve revenue for just those heifers is $170,525 when compared to calving at 22 months.

The optimum age at calving will continue to be a subject of discussion. However, DRMS data shows there is value in evaluating milk production and revenue based on days since birth versus days since a cow started her first lactation. Data show that earlier calving may result in less milk produced during the first lactation. However, by the time the cow reaches her third lactation, production levels are almost the same.

Data also show that maintaining a tight distribution around a herd’s target AFC is very important. Cows with extended AFC produce less milk per day since birth. In addition, culling rates tend to increase. These results emphasize the need to regularly monitor the distribution and to evaluate culling rates as well as milk produced per day of life between the various groups.