Hugues Menard
The transition period is extremely important in the life of a dairy cow. During this period, a cow goes from a state of almost total rest in a non-productive phase to a productive phase, which requires a major adjustment on many levels.
Hugues Menard

Considerable research has been conducted on transition in dairy production, and for good reason.

This research has led us to think about management and nutrition during transition in terms of four targets: immunity, blood calcium, blood sugar and rumen health. This includes renewal of rumen papillae, going from a positive to a negative energy balance, managing hypocalcaemia, avoiding retained placenta, etc. All the metabolic changes that revolve around the four targets generate “normal” stress for the cow.

There is not a great deal of data on the impact of stress on cows. However, it appears likely that some stress is manageable while the combined effect of different stresses takes its toll, leading to metabolic disorders that can be observed in large part during the period around calving. Cows like regularity in their activities and diet. That said, over a period of a few months, a cow undergoes several changes in diet and environment: dry-off, preparation for calving, calving, post-fresh ration and start of lactation.

Given the inevitable level of stress during the transition period, it is important to try to alleviate these changes as much as possible. How? By getting back to basics and determining what cows like. To begin with, the stress factors management generates can be divided into five categories.

1. Time spent in a pen with the same cows

In 2011, research showed that in the days following changes in groups, trips to the feedbunk doubled, the feeding rate increased by 10% (slug feeding), and rumination decreased by 9%. The social structure takes three to seven days to return to normal. Obviously, low-ranking cows and primiparous cows are the most affected. Another study showed a decrease in the number of metabolic disorders based on the number of days spent in a single pen (Figure 1). 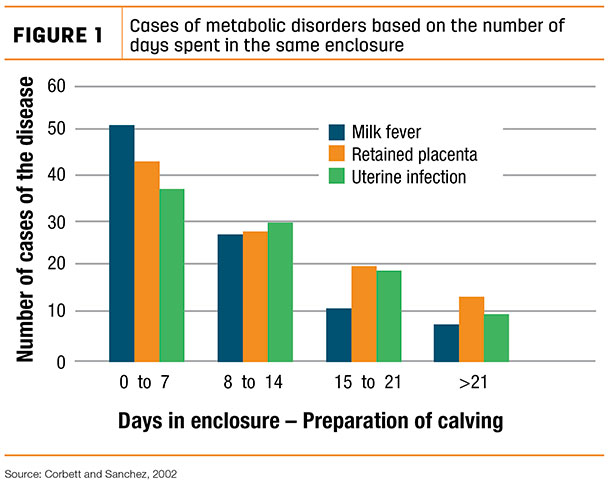 Avoid changing cows one at a time to minimize the impact of pen changes. It is preferable to change them two at a time or in small groups, during a quieter time of the day (end of day, for example, instead of feeding time). If possible, move the cows to adjacent pens, especially between dry-off and close-up. Some farmers find it best to dry off small groups of cows at the same time and keep them together until they calve. However, this requires more pens and more space.

Competition between primiparous cows and the oldest cows will have an impact on resting time (20%), rumination (more than 20%), feeding (10%) and, consequently, upcoming lactation production. Therefore, there are advantages to separating primiparous cows from others in transition.

Regardless of the regrouping strategy, overcrowding will have a real impact. Primarily, if primiparous cows are not separated from the others, their production and that of low-ranking cows decreases when occupancy of stalls and feedbunk space exceeds 80%. It is suggested to not exceed an 80% stocking rate during transition and at the beginning of calving (three weeks) – and that it not exceed 100% (post-calving) if the different parities are separated. It is also recommended to create an isolated space in a calving pen to allow cows to withdraw from others to calve in peace (Figure 2).

Heat stress has been discussed extensively in the past several years, primarily in regard to cows in milk; however, it also impacts all members of the herd, including dry cows and young calves. The impact on dry cows is even more important, since it lasts longer. In a recent webinar, Dr. G.E. Dahl presented interesting results on the effect of heat stress on far-off and close-up dry cows. Cows that suffer from heat stress prior to calving will produce less milk after calving. It was also observed that cooling close-up cows favored the proliferation of mammary glands, which explains in part the difference in production. Cows subjected to heat stress will also eat less prior to calving. More importantly, however, heat stress has an impact on unborn heifer calves. First, gestation will be shorter, and the calf will be smaller and remain smaller until it is weaned. Immune transfer will also be poorer for these calves, even with good-quality colostrum. Lastly, a heifer calf whose dam suffered heat stress at the end of gestation will produce less during her first lactation and possibly her second. These are all good reasons to make sure to cool your cows in transition.

From dry-off to the first weeks of calving, a cow goes through several changes, which inevitably cause a degree of stress. Some stresses are unavoidable, while others can be mitigated or avoided entirely. Preventing unnecessary stresses and minimizing others will likely help your cows experience a smoother transition period, resulting in optimal production.