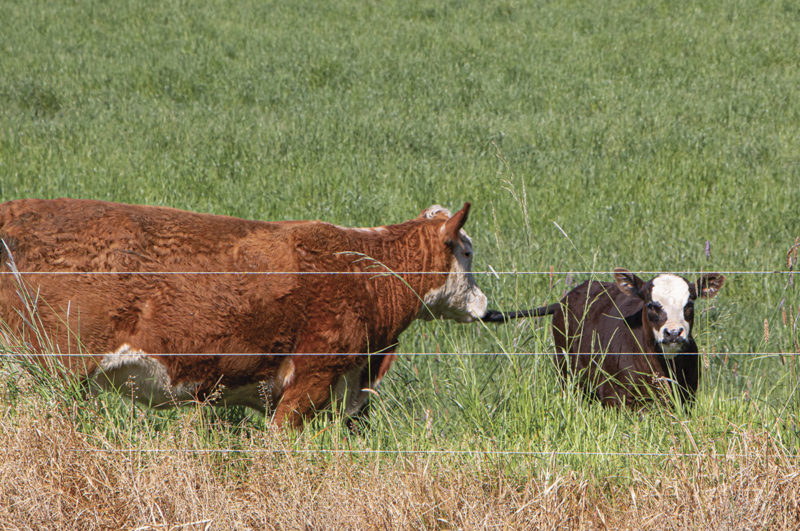 For mob grazing, we are at the ground floor of scientific knowledge, or perhaps even in the basement.

If there was ever an opportunity for good science, this is certainly it.

Here in western Oregon, I’ve worked closely with some extremely skilled graziers – cattlemen, shepherds, dairy farmers. They use various forms of management-intensive grazing (MIG). A few have even used mob grazing, sometimes with spectacular results: deeper roots, more friable soil, higher yields, grass that stays green longer into the dry season. When we see these results, we’re eager to speculate about the reasons and the mechanisms.

These are exciting discussions, but we have a serious knowledge gap. Our observations about mob grazing are not science. As a scientist, I naturally want to see comparative data from rigorously designed studies. Carefully designed trials will generate good data and good conclusions. We can then apply these results to field situations and make informed choices. Good science can help us judge where and when these management strategies work best, why they work and where they don’t. Good science underlies good decisions and good business.

But herein lies a problem. Scientifically, mob grazing is a black box. There is little solid experimental data about it. A Google search is not enough. I can, of course, find scores of private websites and blogs extolling its virtues. And dozens of YouTube videos and magazine articles with graziers excitedly telling their stories. Also popular books with all levels of claims. But real science – tedious, jargon-filled journal articles that only scientists could love, extensive data tables, complicated statistics – not so much. But without real science, we must make decisions in a jungle of testimonials and wild claims. Let’s explore what science can give us.

First, what is mob grazing? You’re probably familiar with the phrase “grazing intensity” that essentially describes how many animals are on a field at a given time. But “number of animals” is rather inexact – what species, size, age, production level? Instead, modern graziers use the more precise term “stocking density,” which is the number of pounds of animals per acre. The calculations are straightforward. For example, consider a flock of 75 ewes grazing 5 acres, with the ewes averaging 160 pounds. This equates to 12,000 pounds of ewes on 5 acres, giving us a stocking density on that field at that time of 2,400 pounds per acre (= 12,000 divided by 5).

Graziers who have used mob grazing have reported higher forage yields, longer growing seasons and massive shifts in the vegetation species. Again, lots of testimonials. But the bottom line is: We really don’t know what is happening to those plants, physiologically and metabolically, or to the soils. This is where we need science.

We already have good science for many other agricultural topics – like nutrition, physiology, basic plant growth. But we haven’t yet done these studies with mob grazing.

True science is a process. It is really a way of asking questions about something, developing alternative explanations and collecting data to compare the alternatives and evaluate those possibilities. We do this in a systematic way by using the “scientific method” – one of the great achievements in human endeavor. (It rivals the development of hot showers, mosquito repellent, coffee and baseball.)

So what questions about mob grazing should scientists ask and evaluate with the scientific method?

Mob grazing implies that forages are responding successfully to the long rest periods combined with ultra-high stocking densities. How long should this rest period be? 70 days, 90, 120, 150? Which forages respond best to it? Do different forages react differently to the different lengths of rest periods?

If we think specifically about grasses, are there systematic differences between cool-season grasses and warm-season grasses in their responses to the rest period? Most forage species have many cultivars (varieties) that can differ in attributes like maturity dates, resistance to defoliation, speed of regrowth, etc. How do these traits affect the responses?

What about legumes? Legumes can fix nitrogen from the atmosphere. How does this long rest period affect their ability to fix nitrogen? Specifically, are the rhizobia bacteria in the legume root nodules suppressed or stimulated by the long rest period? Is the nitrogen-fixing enzyme or any other metabolic pathway down-regulated when the legumes have so much competition for so long? Are different legume species and varieties affected differently?

Because a long rest period usually results in taller plants, how does this height affect animal parasites, particularly the gastrointestinal nematodes (affectionately called “worms” even though they are not worms)? Nematode larvae only climb up the lowest few inches of most plants. Does mob grazing reduce the parasite load in cattle and sheep? If so, how much? Which parasites are affected?

What about plant roots? We’ve observed deeper roots under mob grazing, but is this always true? Are the plants sending thin roots deeper into the soil, or is there actually more root mass? Are there any differences among forage species and/or among annuals, biennials and perennials?

And we cannot ignore the topic of the arbuscular mycorrhiza. These microscopic fungi are integrally associated with plant roots, and they extend the nutrient absorptive capacity of these roots immensely. How are these fungi affected by long rest periods? Would healthier root systems improve plant persistence? Can forages stay green longer because of this? If so, which forages?

Speaking of roots, we should also focus on the soil. Mob grazing clearly causes trampling of some of the forage. This results in lots of stomped vegetative matter on top of the soil; lots of manure on top of the soil, usually evenly distributed; and less open soil that is directly affected by sunlight, wind and evapotranspiration. Do soils stay cooler because of this trampled vegetation? Do soils dry out more slowly? Does the temporary, ultra-high stocking density cause soil compaction? Which soils are affected, as soils come in hundreds of flavors? How are these factors influenced by different rainfall patterns?

In a mob grazing system, the forages are relatively mature in Phase III, so what is the nutritional value of the feed during a grazing session? We would need to collect samples of the dry matter consumed – measuring the stuff that actually goes into the mouth of the grazing animal. How much sorting of the feed occurs? Are there differences between sheep, cattle, goats, bison, etc.?

So when someone asks me about mob grazing and refers to a couple of compelling YouTube videos they saw online, a lot of underlying questions go through my mind. How much science do we really know? How much do we not know?

For mob grazing, we are at the ground floor of scientific knowledge, or perhaps even in the basement. But there may be a solution. All we need are a few dozen good scientists and their graduate students, some laboratories dedicated to this research, university administrators willing to support these efforts, a few websites designed to track and organize the science-derived data about mob grazing, and a few billion dollars in research funding.

As a wise person once said, hope springs eternal. In the past 100 years, didn’t the Chicago Cubs win the World Series once?