The Milk House: The taste of music

Ryan Dennis
It’s difficult to get people’s attention in the modern era. According to research, the average individual sees over 5,000 advertisements per day.
Ryan Dennis

Ryan Dennis is the author of The Beasts They Turned Away, a novel set on a dairy farm. Visit his ...
Email Ryan Dennis

The end result is that we’re bombarded with marketing noise in our daily lives, and on the other side, it’s becoming more difficult for any one company or product to stand out.

The Dortmund Concert House in Germany was up against that and more in 2010. Built eight years earlier in the heart of a blue-collar industrial city, the music hall was struggling to get by. The orchestra and opera had already been in Dortmund for over 100 years, and being a famous soccer town whose team often dominated headlines, the venue had to compete with these landmarks for the small margin of citizens who might be predisposed to classical music. To make matters worse, there are concert halls in two cities that are both less than 60 miles away. The Dortmund Concert House depended on ticket sales to support its programming, and it was starting to look like the music was about to end.

And then they brought in the cows. Or more accurately, the musicians brought their instruments to the barn. The Dortmund Concert House struck a special deal with Jung von Matt, Germany’s largest advertisement agency. Generally, Jung von Matt only takes on million-euro contracts, but they agreed to work for the Dortmund Concert House for a rather minimal fee … as long as they were allowed to be “creative.” Inspired by the research that suggests cows produce more milk while listening to classical music, they set up a concert in the barn of a 180-cow organic dairy herd. 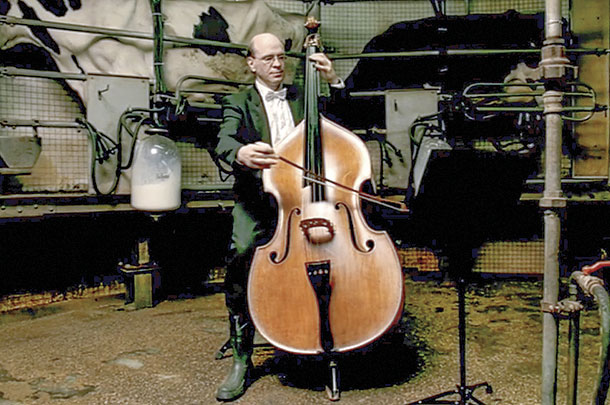 The live concert given by the Dortmund Concert House to the Holsteins inside the barn was said to introduce them to the aesthetic taste of classical music. The black and white suits of the performers juxtaposed against the freestalls, and a rotary parlor made for an eye-catching video and promotional material. They spread the band around the barn – including in the stalls among the cattle – as the conductor stood in the alleyway and directed the music.

Celloists violently plucked at the strings while the cattle ate silage or waited to be milked. After the personal concert, the cows were then played recordings of selected artists who were to perform at the concert hall that season. The milk was bottled from each session and labeled accordingly with the artist’s name and background information and then made available in local shops.

Suddenly, the numbers of subscribers to the hall rose by 17%, and the seats were almost 75% fuller. The Dortmund Concert House had its most financially successful year to date, garnering national and international attention. It was able to attract a whole new group of people in a working-class city that thought they didn’t have an interest in classical music but ultimately found they could relate to it through a food product. As one promotional video suggested, those cows were making the taste of music, and people responded.

Farmers have always understood milk to be the tangible outcome of a lot of abstract ideas and beliefs. Consumers put it on their cereal or have a glass at dinner, but for those who produce it, milk stands for everything it took to get it on the truck. Each gallon contains the early mornings, the work that gets done even when you’re sick and milking on holidays when you’d rather not have to go to the barn.

More than that, perhaps, it represents a lifestyle different to what most of the population experiences and the strength of character that comes from it. In it is a relationship to the land, a familial history on it and all the memories that make up both of those things. It contains the years in which dairy farming was profitable, and those when it wasn’t, and everything that was necessary to survive them.

Sometimes a glass of milk is more than just something to drink. There’s something elemental in food – especially a natural product like milk – and maybe because of that, it shouldn’t be surprising that it can be used to introduce people to experiences they weren’t familiar with. Perhaps the example of the Dortmund Concert House not only showcases the power of milk as a product but also implies the average person’s desire to reconnect with where their food comes from. People want the story behind the things they eat. They want to be able to taste the music in it. It just might suggest that there’s an opportunity to engage the non-farming population with everything it takes to make that glass of milk.

PHOTO 1: Musicians from Dortmund Concert House in Germany played among the cows on a German dairy farm in a promotional video last year.

PHOTO 2: After the live performance captured in the video, cows on the farm were exposed to the concert house’s recorded music during milkings. Milk from the farm was bottled under a “music-made” milk label. Courtesy photos.

Ryan Dennis is the son of a former dairy farmer from western New York and a literary writer.