USDA’s monthly report estimated that March 2017 U.S. milk production was up 1.8 percent compared to the same month a year earlier, the smallest year-over-year increase since August 2016. But despite the slowdown, increasing cow numbers in most major dairy states would indicate dairy farmers started spring with both feet on the accelerator. It was winter weather-related problems in the West that reduced the overall speed of growth.

However, monthly milk production per cow was down nearly 1.5 pounds per day in California, Idaho, Oregon and Washington.

At 1.755 million head, the number of dairy cows in California was unchanged for a third consecutive month. Longer term, the California total was down 12,000 head from a year ago and the lowest since January 2011. Nine other states, posted small declines in cow numbers compared to a year ago (Table 1). 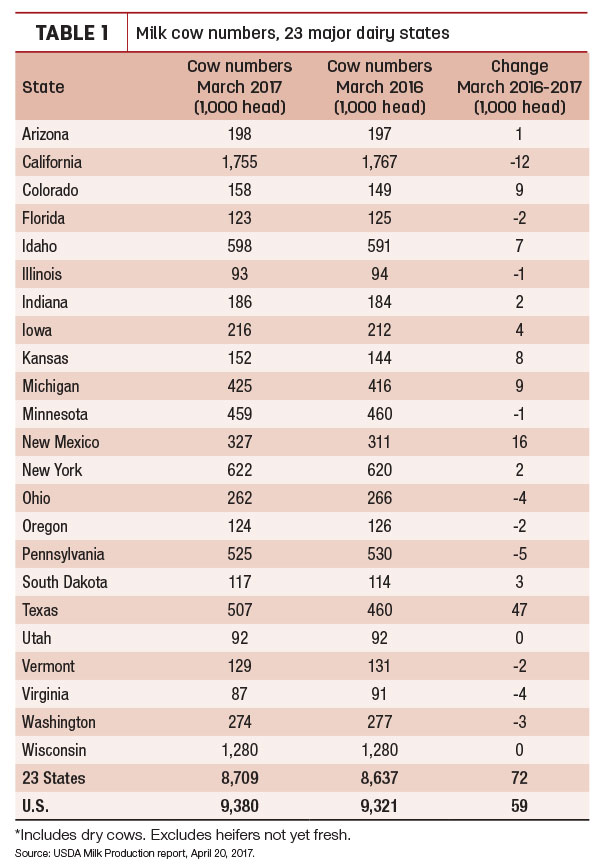 Idaho had 7,000 more cows, but the rough winter resulted in 2.2 percent less milk per cow, according to the monthly dairy situation and outlook report from Bob Cropp, dairy economics professor emeritus at the University of Wisconsin-Madison.

On the other end of the spectrum, New Mexico and Texas had the highest relative increases in milk production compared to March 2016, up 9 percent and 16.4 percent, respectively. Recovered from last year’s Winter Storm Goliath-depressed numbers, March 2017 cow numbers were up 47,000 in Texas and 16,000 in New Mexico. Texas topped 500,000 dairy cows for the first time ever. Elsewhere, cow numbers were up 9,000 head compared to a year ago in both Colorado and Michigan, and up 8,000 head in Kansas.

While down from earlier this year, milk prices are expected to end 2017 higher than 2016. Offsetting building dairy product inventories, growth in domestic butter and cheese sales and continued improvements in U.S. dairy exports should provide support for higher prices, Cropp said.

Cropp’s forecast is slightly more optimistic than current Class III futures. As of the close of trading on April 20, Class III futures did not reach the $16s until August, staying below $17 per cwt for the remainder of the year, with a 2017 average of about $16.10 per cwt. Some price forecasters have the Class III price reaching $18 per cwt by August.

In the most recent USDA dairy outlook summary, the 2017 U.S. dairy herd is expected to average 9.385 million cows, 5,000 more than the previous month’s forecast. USDA’s estimated milk per cow was cut 35 pounds from the previous month to 23,150 pounds per cow. With these changes, the 2017 milk production forecast is 217.3 billion pounds. If realized, production would still be up about 2.3 percent from 2016’s total of 212.4 billion pounds.

Dairy margins deteriorated over the first half of April due primarily to weaker milk prices, according to Commodity & Ingredient Hedging LLC. While margins remained above average from a historical perspective, they nonetheless slipped below the 70th percentile of the previous decade for all but the first quarter of 2018.

On a positive note, feed costs held mostly steady during the first half of April, and are expected to be moderate due to their own heavy supply outlook. While U.S. weather and new crop dynamics will largely be the main price catalysts moving forward, the heavy supply of old crop will continue to weigh on the market and blunt price advances.

Driven by an increase in beef cow culling, estimated federally inspected weekly total cow slaughter for the first quarter of 2017 was up about 5 percent compared to the same period in 2016. Weekly dairy cow culling was running slightly more than the corresponding week a year earlier, although the U.S. dairy herd was also larger.

First-quarter prices for cutter cows (beef and dairy cows combined) were estimated at $62.63 per cwt, and prices for the remaining quarters for 2017 are likely to tick higher, according to USDA forecasts. Second-quarter 2017 cutter cow prices are forecast to average $63-$66 per cwt.