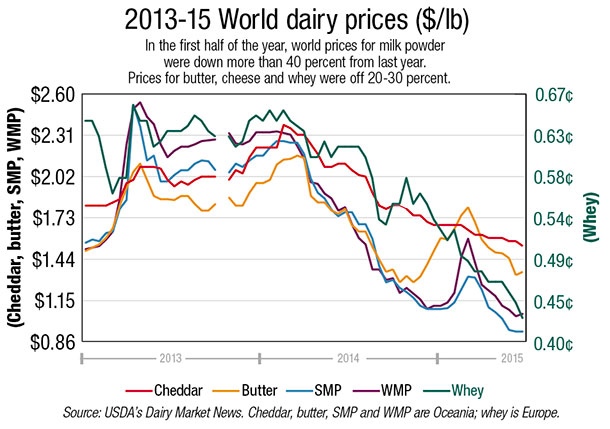 The biggest issue is that milk supply continues to expand, even in the face of lower prices. In the first quarter, output from the five major suppliers (EU-28, U.S., New Zealand, Australia and Argentina) was about flat. But in April and May, production was up about 2 percent with gains from every corner.

Right now, the world doesn’t need that kind of milk production growth. In the first five months of the year, China imports (on a milk-equivalent basis) were down 38 percent from last year. That’s the equivalent of pushing back about 507,000 tons (1.1 billion pounds) of milk per month. Put another way, that’s the same as if milk production from the five major exporters increased by an extra 2.1 percent this year.

Russia is no help either; besides what it’s getting from Belarus, Russia is importing just a fraction of what it bought last year. In late June, Russia extended its ban on EU dairy products for another year. 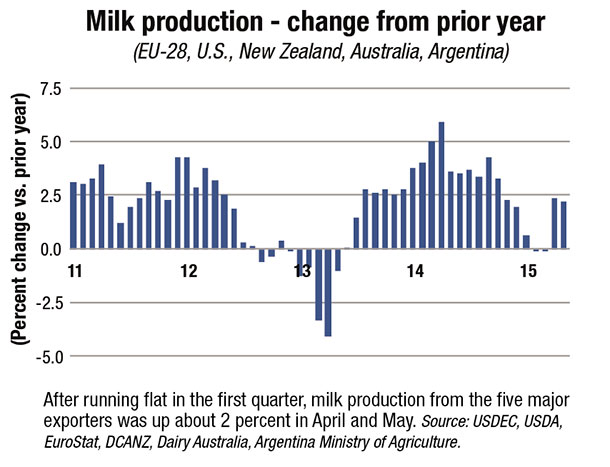 Other importers, such as Mexico, Southeast Asia and Japan, have bought aggressively, but they can’t make up for what China and Russia are leaving on the table. And with these early purchases, buyers are stocked up pretty well for months to come.

Most observers are coming to the realization that the chance of the markets still rebounding this year is getting slimmer and slimmer. Analysts are pushing out their timetable for any kind of sustained improvement in prices to somewhere in 2016. PD 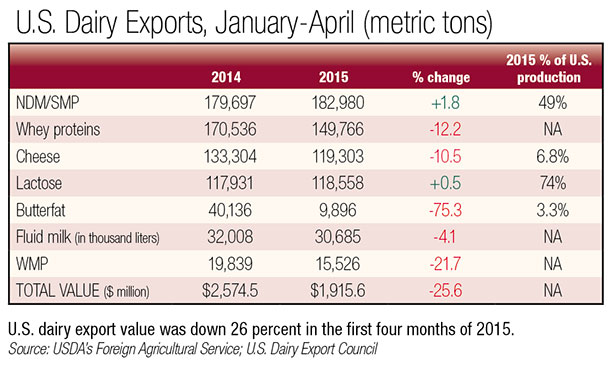 U.S. suppliers moved milk powder aggressively despite soft world-market conditions. Shipments of NDM/SMP were 57,400 tons, the third-highest total ever. This volume was up 8 percent from March (daily average) and up 8 percent from last year. Sales to Southeast Asia – led by Vietnam and Indonesia – were 23,713 tons, the most ever and 10 percent more than a year ago.

Cheese exports in April were 31,656 tons, down 6 percent from a year ago. Suppliers sold 8,556 tons to Mexico, up 48 percent from last year. However, shipments to South Korea, Japan and the Middle East/North Africa region trailed year-ago levels. 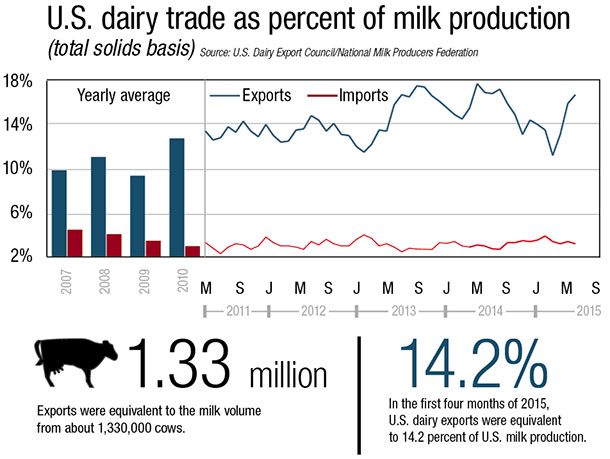 In a tough year, a number of bright spots

This update is provided by the U.S. Dairy Export Council (USDEC), a non-profit, independent membership organization that represents the global trade interests of U.S. dairy producers, proprietary processors and cooperatives, ingredient suppliers and export traders. Its mission is to enhance U.S. global competitiveness and assist the U.S. industry to increase its global dairy ingredient sales and exports of U.S. dairy products. USDEC programs and activities are supported by the dairy checkoff program, with additional funding from the U.S. Department of Agriculture, Foreign Agricultural Service and from membership dues. For more information, go to the website.