Mastitis is one of the most common and costly diseases facing the dairy industry today. Annually, over $2 billion are lost to mastitis alone, with an average per-case cost estimated at $444.

Nearly two-thirds of these economic losses are attributed to the consequences of subclinical infections, which result in decreased milk production, increased discarded milk and lost milk premiums. 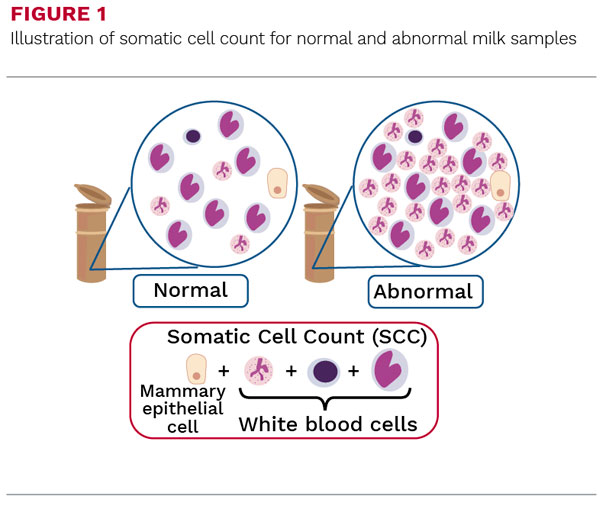 Over the years, various thresholds, or cut-points, have been evaluated to determine the best way to utilize SCC for identification of subclinically infected animals. Following evaluation of these various potential cut-points, the National Mastitis Council adopted a cut-point of 200,000 cells/mL as the threshold that is most indicative of inflammation and an increased likelihood of infection.

Though this cut-point is very well known, the fact that it was determined on a quarter basis is often overlooked. However, adoption of the cut-point on a composite basis is common in practice, especially with the reduced cost and ease of collection of composite-level milk samples.

Unfortunately, composite sampling is inherently flawed in that it is affected by dilution. Quarters that would screen positive on the quarter level can be masked on the composite level if the additional three quarters have low SCC.

Since research has little consensus on the optimal cut-point for composite collected SCC, and almost none directly comparing the quarter and composite sampling, we performed a study to directly evaluate quarter versus composite milk sampling for detection of subclinical mastitis and to determine whether the use of the 200,000 cells/mL cut-point on composite samples was as effective as with quarter samples.

Quarter milk samples were aseptically collected following normal milking preparation from 107 Holstein dairy cows housed on one farm in central New York. Composite milk samples were created for each cow enrolled by pooling an equal amount of milk from each quarter sample (Figure 2). 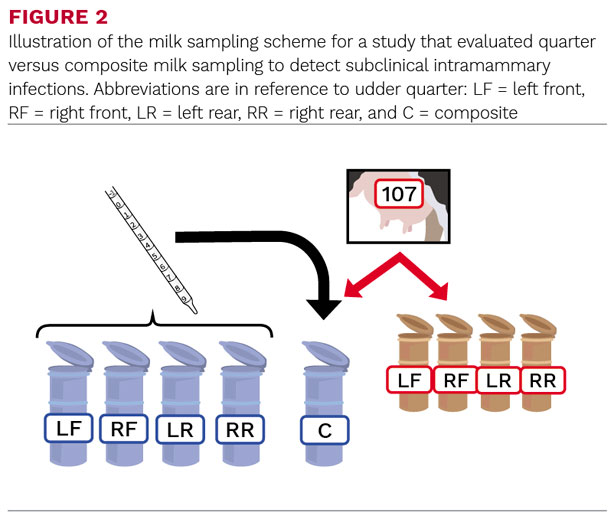 In our study population, results showed that at the 200,000 cell/mL cut-point, composite sampling appeared to have similar effectiveness as quarter sampling to identify subclinically infected animals on a herd level. However, our results also suggest in a large population of first-lactation animals, a high proportion of coagulase negative staphylococci infections, or both, might play a large role in the effectiveness of this cut-point on herds, and optimal cut-points may vary between farms.

Future multi-farm studies directly comparing quarter and composite samples taken at the same time and from the same milking fraction from each animal will help us better understand the effects of parity, pathogen type, and stage of lactation on the accuracy of SCC to diagnose subclinical mastitis infections.