For hay operations that are overcapitalized (too much equipment for their level of production), the combined depreciation and interest costs for equipment are sometimes higher than all their cash costs combined. Determining how much equipment you can afford to have based on the size of your hay operation may be the most important decision you make regarding the profitability of your operation.

The second misconception is that all of depreciation is a “fixed” cost, when in fact part of it is a “variable” cost. For example, let’s say you buy two identical new tractors. One you put 500 hours on the tachometer in one year, and the other you park in the barn and never use. At the end of the first year, you sell both tractors. Even though you didn’t use the second tractor, will it bring as much as you paid for it one year ago?

Definitely not in a normal situation. This drop in value is the fixed deprecation. It doesn’t matter if you use that piece of equipment or not, it will drop in value. On the other hand, you now sell the tractor that you ran for 500 hours. Will this tractor bring as much as the one you parked in the barn? Again, in a normal situation the answer is a definite no. The difference in value between these two tractors is the variable depreciation: The more equipment is used, the steeper the drop in value.

Interest on equipment is the other major fixed cost we will examine. If you have a loan on your equipment, interest is an obvious cost (although one you are still likely to forget about in the short run). If, however, you self-financed a piece of equipment, it probably isn’t an obvious cost, but I will argue it is still a real cost. For example, if you have a loan on your farm for 6 percent, with a balance of $100,000, and you self-finance a piece of equipment for $25,000, you could have taken that $25,000 and paid off part of your farm mortgage.

In general, the cost you allocate for self-financed capital should be the highest interest rate you have outstanding on your farming enterprise. If you are one of the fortunate few who have no loans on their farming operation, you should charge yourself a reasonable interest rate based on what you could earn on that capital in a relatively risk-free investment elsewhere.

Now that you have a fundamental understanding of depreciation and interest, we can look at some examples to help explain the extent of these fixed costs. Table 1 shows a $250,000 capital investment scenario for a hay operation. 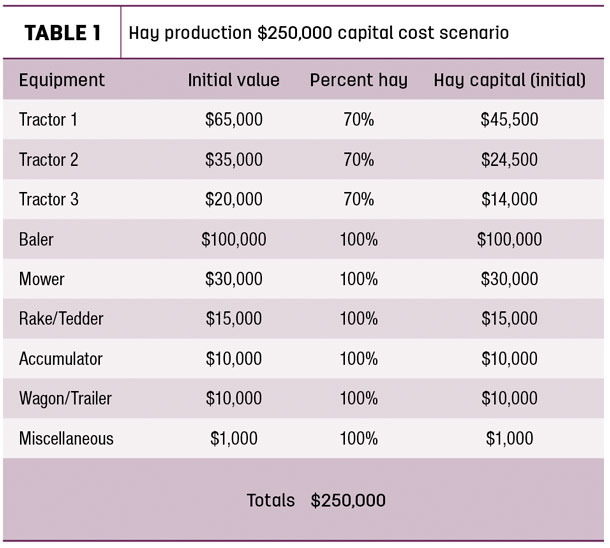 Note for the tractors, it is assumed that they are also used for other farming enterprises (examples: grain, cattle), and thus we prorate this capital by the relative amount of time they are used just for the hay enterprise.

The rest of the equipment is used only for the hay operation, and thus we allocate the full value of that equipment to the hay operation. Some of this equipment may be purchased new, and some used. Three other capital cost scenarios are also used in this analysis: $150K, $100K and $50K.

The actual rate at which equipment loses value is highly variable based on the original value of the equipment, age, type of equipment, brand of equipment and specific market conditions. For example, newer equipment will lose value more quickly than older equipment, and balers will lose value more quickly than tractors. The fixed portion of depreciation was assumed to be 2 percent per year from the initial value, for a period of five years. Thus, with the $250K initial hay capital scenario, the final value after five years if this equipment was parked in the barn without any production would be $225K. While it is the same percentage for all four scenarios, it will result in very different levels of overall value loss, ranging from $25K for the highest cost scenario to $5K for the lowest cost scenario.

Variable depreciation based on total hay production was assumed to be $4 per ton per year. Thus producing 500 tons of hay each year would bring the value of the equipment down an additional $10,000 after five years of production. The fixed and variable depreciation used here are rough estimates: They may be accurate for one farm with a particular equipment arrangement, and may be off a moderate amount for another farm. However, the general concepts regarding how the combined fixed costs change as production changes will hold.

The interest rate was assumed to be 4 percent, and the resulting interest cost along with the fixed and variable depreciation previously detailed are combined to determine the total fixed costs (depreciation and interest) on a per-ton-of-hay- produced basis. Figure 1 summarizes these overall fixed costs of production with the four capital cost scenarios.

For example, if you were using the $150,000 hay capital scenario and produced 750 tons of hay per year, you would draw a line straight up from 750 tons until you hit the $150,000 scenario (second curve from the right), and then draw a horizontal line from that point to the left until you intersect the left axis and read the result, which would be $15.

What is an appropriate fixed cost for a hay operation? While you would desire it to be as low as possible, you also have to consider the trade-off between reducing your fixed costs and potentially having higher labor and repair costs. Keeping labor costs in check is particularly important with small square bales, so investing in capital equipment that reduces labor costs more than the increase in fixed costs would make sense. Cutting equipment costs beyond a point will be counterproductive. In the end, you need to strike a balance.

What is too high of a fixed cost for hay production? For cow-quality round bales, I tell producers they need to target $15 per ton or lower. This is because their hay is usually only worth $60 to $75 per ton on the open market. You simply will not have a chance at making a profit when you are approaching one-thirds to half the value of the hay just on fixed costs before accounting for your cash production costs. However, with more valuable hay, and particularly where you are making small square bales and large square bales that are dairy-quality, this target level for a reasonable fixed cost will go up. I would say at least to $25 per ton for large squares and maybe as high as $35 per ton for small square bales as long as you are correspondingly decreasing your labor costs.

If you have specific equipment-depreciation-interest scenarios that you would like to analyze, I would be glad to work with you on this.

Greg Halich is a associate extension professor of agricultural economics at the University of Kentucky. Email Greg Halich.