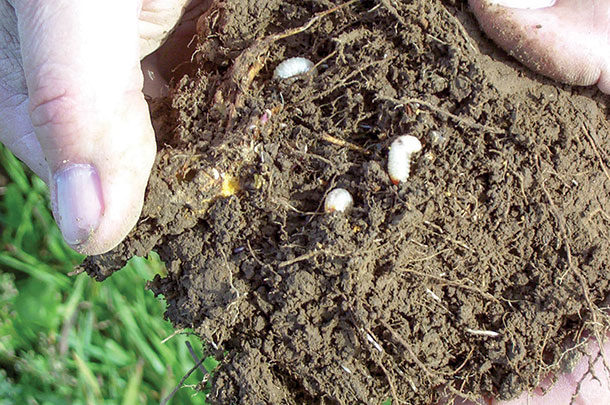 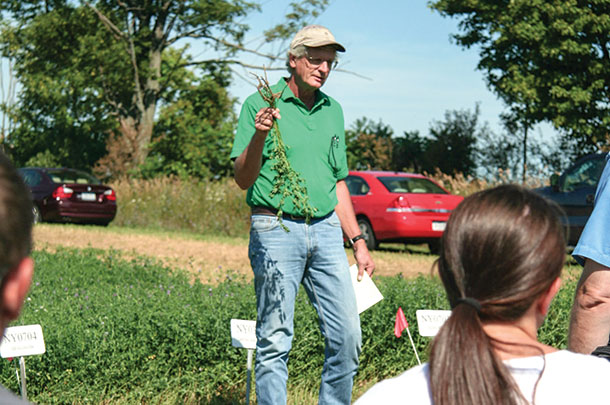 Since 2007, the Shields’ Lab at Cornell University has assisted northern New York farmers in inoculating alfalfa fields using insect-attacking nematodes to suppress the spread of ASB.

For best economic results, nematodes should be applied on alfalfa fields in their seeding or first production years. The nematodes must be applied on cloudy days or late in the day when they are less exposed to the ultraviolet light that is fatal to them. The nematodes also need time to enter the soil after surface application. 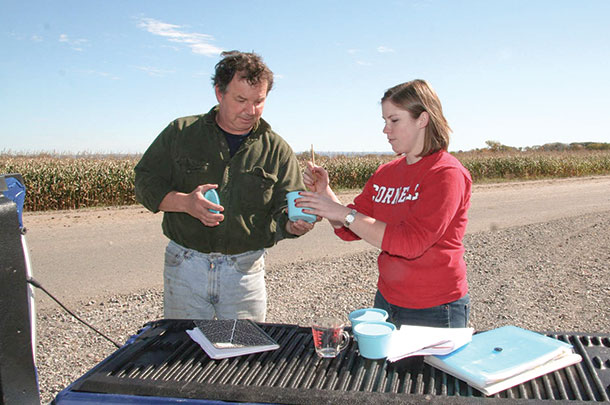 Applications need to be made before Sept. 1. It requires three to five years to totally inoculate a farm with nematodes and reduce snout beetle populations to a manageable level.

With training from Shields and Testa, regional crop service agribusinesses are beginning to fill an economic opportunity by offering custom raising and application of the nematodes between planting and harvesting seasons. Five businesses in northern New York added nematode applications to their services menu in 2015.

Nematodes should be applied using a “skip nozzle” method, leaving every third nozzle open. Nematodes will be applied to 33 percent of the acreage covered by the application equipment (based on nozzle separation of 22 to 24 inches).

Nematode costs using the skip nozzle method will be $26 per acre (if the nematodes are purchased from Shields’ Lab).

Shields’ Lab will continue to offer farmers the option to purchase nematodes, or assist farmers interested in raising their own nematodes on their own farm with their own labor.

If growers choose to raise their own nematodes, cost can be reduced to around $15 per acre. On-farm raising requires the farm to purchase their own wax moth larvae used to raise nematodes. Shields’ Lab provides a list of reputable worm suppliers and instructions for incubating and raising the nematodes. 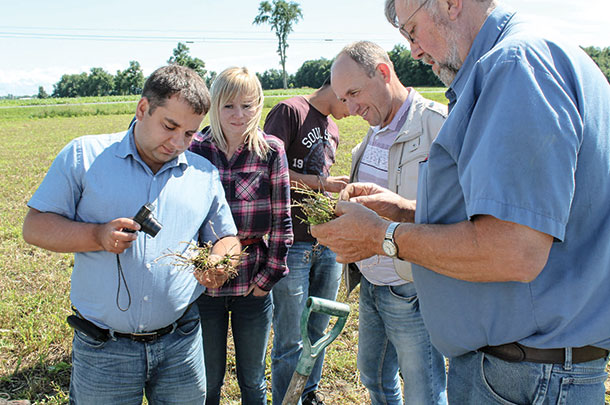 Interested farmers will need to contact Shields’ Lab no later than 60 days prior to a planned application based on their cutting schedule to review the steps required to have a successful process.

Mary DeBeer, a partner with her father Ronald in DeBeer Seeds and Spraying, Moira, N.Y., learned in a training program with Testa how to raise and apply nematodes. In 2015, they applied nematodes to 435 acres located across six farms. With technical assistance, the DeBeers planned to establish their own nematode-raising lab in 2016.

“The northern New York research showed a science-based benefit to using the nematodes; that kind of information helps make our decisions,” Windsong’s crop manager Cody Reynolds says. “With access to custom applicators through the cost-sharing program, we made one call and application was made with their expertise at the right time.”

“Our alfalfa acres represent half of our dairy diet,” Doug Moser, of Moserdale Farm, Copenhagen, N.Y., says. “With snout beetle problems for years, we never could keep a stand of alfalfa before we started participating in the research trials. 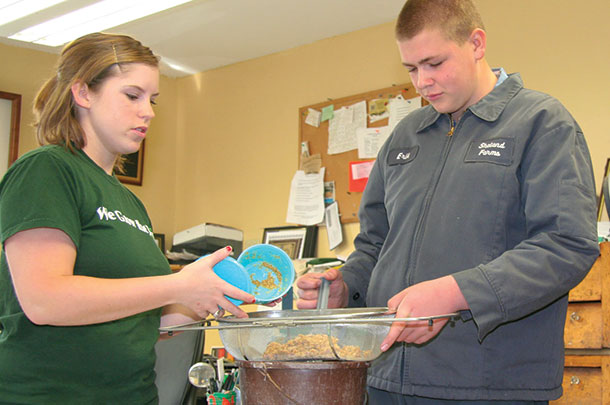 Now one application of the nematodes looks to have good results long term, so we continue to apply them (to new plantings).”

“The outlook had become pretty bleak; our alfalfa seedings were half-gone by the third year, with none left by the fourth,” Murray says. “The Northern New York Agricultural Development Program snout beetle project has paid dividends here.

My 2015 alfalfa crop produced the best first-cutting yield ever, and, with the nematode applications, we now have two fields producing more than 60 percent alfalfa into their sixth year,” Murray says.

To determine the current range of the ASB, NNYADP is funding updates of the ASB range map, first developed eight years ago. Growers and Cornell cooperative extension field crops specialists are scouting in Clinton, Essex, Franklin, Jefferson, Lewis and St. Lawrence counties. The pest also exists in three other counties in New York, and in southeastern Ontario, Canada.

“Every year we find new infestations,” says Kitty O’Neil, a regional extension field crops and soils specialist. “If a neighboring farm has snout beetle, there is a high likelihood that ASB is present in your alfalfa.” 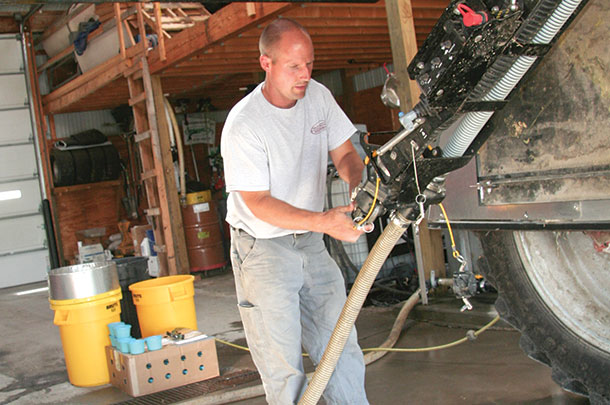 “The decline in the alfalfa stands is often blamed on winterkill, aggressive cutting or the alfalfa variety, when, in fact, it is alfalfa snout beetle. Growers may only notice that the stand is thinner each year,” says Michael Hunter, a northern New York extension field crop specialist.

Details of the 2016 program have been announced, and there will be no cost-sharing available. However, two discount programs are offered. The cost of nematodes will be discounted 10 percent for any farm placing an order no later than April 29 for delivery by June 15. And nematodes will be discounted 10 percent for all participants who pay on delivery. 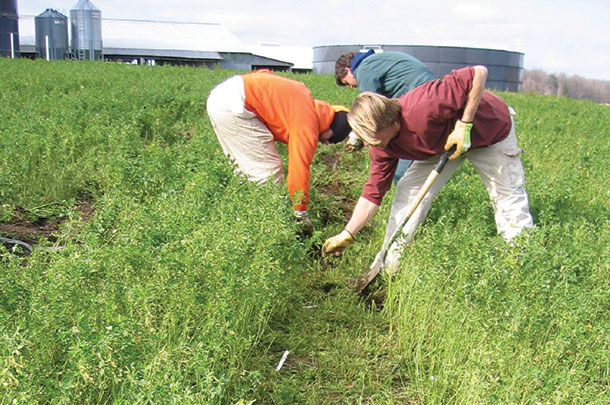 Participating farms will not be limited to the number of acres they wish to treat. Farmers must contact Shields’ Lab no later than 45 days prior to a planned application based on their alfalfa cutting schedule. For a flier on the 2016 program, visit 2016 NNY Alfalfa Snout Beetle Biological Control Program Nematode Cost and Rearing Opportunities.

The Northern New York Agricultural Development Program is a farmer-driven research and technical assistance program for Clinton, Essex, Franklin, Jefferson, Lewis and St. Lawrence counties. Funding for NNYADP is supported by the New York State Senate and administered through the New York State Department of Agriculture and Markets.  FG

PHOTO 4: The success of the NNYADP alfalfa snout beetle control project reached Russian farmers who visited northern New York in the summer of 2015 to learn how they might apply the nematode protocol in their country. Photo provided by Kara Lynn Dunn/NNYADP.