Karen Lee
Almost 10 years ago, brothers Mark and Paul Berning decided to install an automated calf feeder to assist with one of the tasks at Green Waves Farm in St. Michael, Minnesota.
Karen Lee

Mark was spending more time away from the farm and liked how he could still identify sick calves by checking in online.

He says he began to think, “If [automated] milking works as good, we should consider it.”

Four years later, they built a new barn with four automated milking systems. They also continued to milk a part of the herd in the existing flat barn parlor with the intention of adding more robots eventually.

That day came sooner than expected. After seeing a lot of efficiencies in the robot barn and struggling to find labor, they put in four more robots and freestalls in a design that mirrored the first half of the barn. 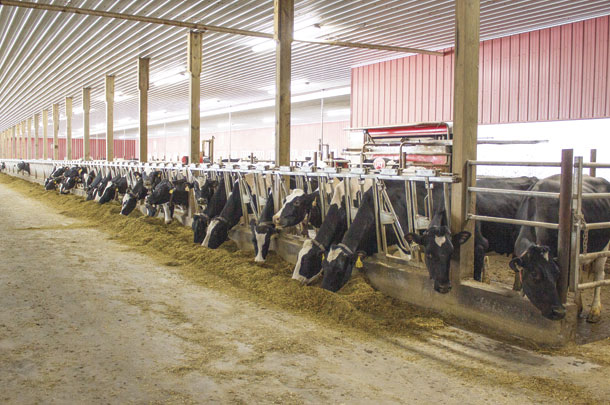 “We didn’t have anyone to milk in the parlor. We were doing it and then coming over here [to manage the herd in the robot barn],” David Berning says.

David, Mark’s son, joined the farm as the first automated milking systems were being installed. His primary duties are caring for the cows and other daily responsibilities.

David, Mark and Paul are all full time on the farm. They have some additional part-time help in the morning and after school.

When they start at 4:30 a.m., they pull the list from the computer, collect cows, wash the robots and clean stalls. This is repeated in the afternoon, with employees fulfilling a larger share of the responsibilities. Most days, they are out of the barn at 4:30 p.m. with some high school help staying another hour to finish cleaning stalls.

“We can manage the farm with two people per day,” David says.

At least one person is tied to the farm every day to respond to robot calls. With eight robots, David says, “We have eight times as many breakdowns as somebody that has one [robot], but we also have eight times more experience.”

Mark is impressed with how the technology has improved the farm. “We’re getting efficiencies you wouldn’t believe,” he says.

They can identify sick cows faster based on temperature, rumination and mastitis information. Their average somatic cell count was 200,000 in the old barn with multiple people milking cows. Now it is down to 140,000.

The automated milking systems don’t overmilk the cows, which Mark says is a big help with somatic cell count (SCC) and milk quality. They also make treatment decisions based on computer reports even if mastitis isn’t showing on CMT.

“It seems like we’re always dealing with problem cows because now we don’t have to worry about the good cows,” he says.

The herd’s breeding has improved with the addition of activity monitors. Milk production is up 10 to 15 pounds. Mark says they no longer experience a drop in production due to heat.

When David looks at production, he is focused on components. “I’m looking at pounds of components per minute. That cow is more profitable,” David says, noting he prefers a cow at 60 pounds of milk with high components than a 70-pound cow with low components.

Before starting the first set of robots, the barn was stocked with overflow cows, which allowed them to be pre-trained through the robots. Then they split the cows that had experience with the robots between the two pens.

When they moved into the second half of the barn in April 2017, they were at 360 cows, and only 40 of them had yet to be exposed to the robots.

They were focused on growing in cow numbers and kept some cows that didn’t adapt to the new milking style. “We should have sold them,” David says in hindsight.

When they reached capacity in October, their focus switched to fine-tuning the herd and culling cows that take too much time. They like to train pre-fresh heifers by bringing them through the robot so they can hear the noise and see the feed.

“It’s not uncommon for us to milk a fresh heifer with one person,” David says.

Once they are discharged from the hospital pen, they typically will start visiting the robot on their own.

For hoof health, they inlaid rubber on the floor where the cows eat. They keep footbaths at the far ends of the barn so they don’t disturb cow flow by the robots. Cows are ushered through when they scrap stalls and when they bed the stalls on Tuesdays and Fridays.

The Bernings want to see every cow up at least once a day to observe how it is doing. There is a trim chute at the farm, and they touch up five to six cows per week.

They’ve noticed a higher electric bill but know some of those costs are offset with other savings. For instance, automated alley scrapers are running in place of scraping the barn with a skidloader.

Feed costs are also up a bit due to the robot pellets, but the automated feed pusher has taken weighbacks to “virtually nothing,” Mark says. 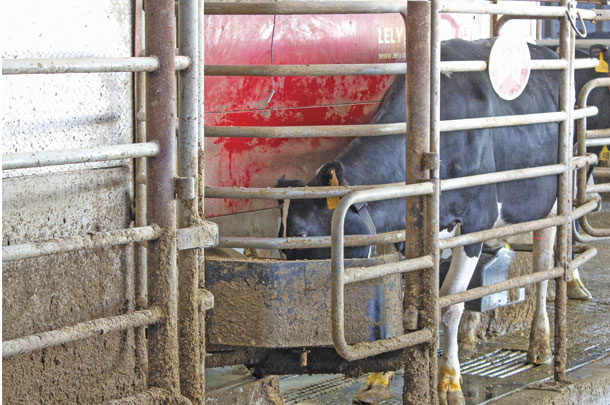 Paul and Mark take care of the farm’s field work. They grow all their silage needs and used to grow high-moisture corn. Since that need has been eliminated with the pellets, they now rent their extra land to their neighbors. They also hire a neighbor to help with tillage and planting and a custom chopper for corn silage.

The addition of automated milking at Green Waves Farm was spurred by concerns over labor and is now acclaimed for the efficiency it has brought.

“I wouldn’t say it’s the answer for everybody, but for us it’s been really good,” Mark says.

PHOTO 1: The addition of automation sparked David Berning’s interest to farm with his father, Mark, and uncle, Paul, at Green Waves Farm in St. Michael, Minnesota.

PHOTO 2: There are two robots in each of the four freestall pens in the barn. After the addition, that essentially flipped the barn, all robots are positioned near the center of the building.

PHOTO 3: A cow enjoys its allotment of pellets while waiting to be milked in one of the farm’s eight automated milking systems. Photos by Karen Lee.

Green Waves Farm was one of six farm stops on the Lely Journey Tour held in Minnesota, Wisconsin and Iowa, March 19-22.