Dave Natzke
Enrollment in the Dairy Margin Coverage (DMC) program isn’t scheduled to start for another couple of months, but dairy farmers participating in the program at the top margin coverage level ($9.50 per hundredweight [cwt]) on the first 5 million pounds of milk will see their premium costs covered quickly.
Dave Natzke 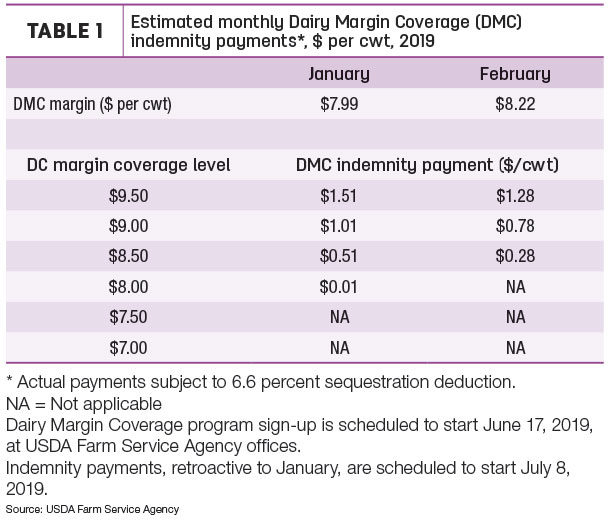 That averages out to a DMC indemnity payment of about $1.395 per cwt on January-February milk marketings for producers who select the $9.50 coverage level.

The premium for $9.50 margin coverage is 15 cents per cwt, or $4,275 for the full year. Thus, the example dairy would see a net return – above full-year premium costs – of $1,914 in January-February alone. (Producers who sign up for the full five-year length of the DMC program are eligible for another 25 percent discount on their premium, dropping it to 11.25 cents per cwt.)

Market outlooks have been improving, but as of March 29, DMC margins were forecast to remain below $9.50 per cwt into August 2019.

Compared to a month earlier, average milk prices were slightly higher in 20 of 23 major dairy states, led by a 50-cent increase in Iowa and 40 cents in Idaho (Table 2). Compared to a year earlier, February 2019 milk prices were up at least $2 per cwt or more in Arizona, Michigan, New York, Pennsylvania, Vermont and Virginia. 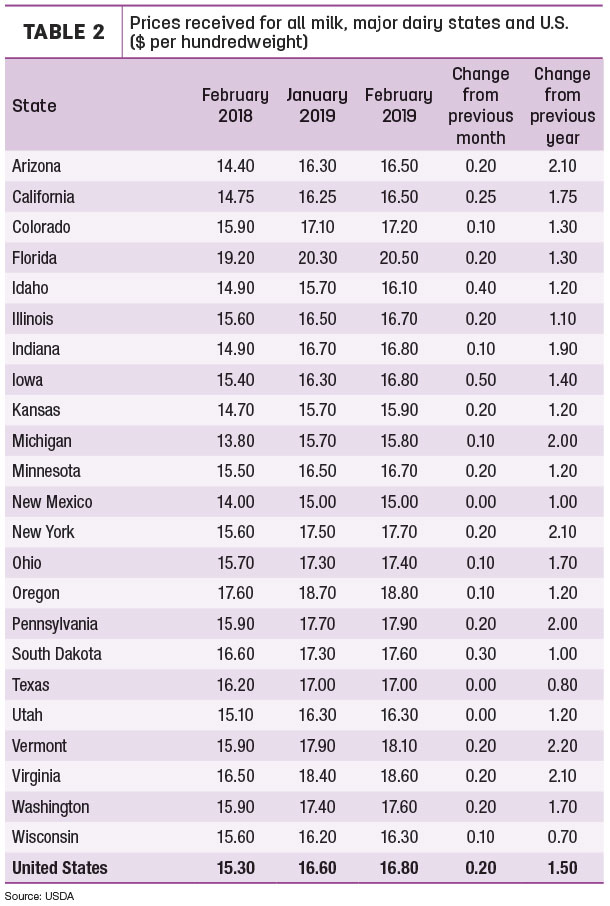 What if? New ‘dairy hay’ information

Based on those prices, January and February 2019 dairy quality hay prices averaged $221 and $225 per ton, respectively. That compares to $181 and $180 per ton for all alfalfa hay during the same two months. 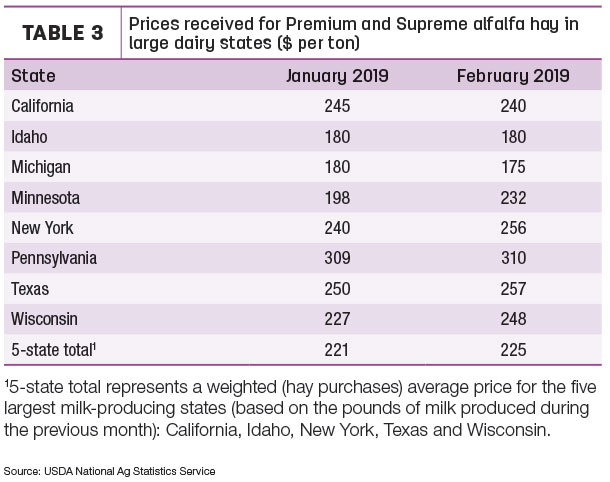 It’s only a “what if?” scenario, but if that average of high-quality alfalfa prices was incorporated into the milk income over feed cost margin under the new DMC program, what would the impact be?

First, a review. A carryover from the Margin Protection Program for Dairy (MPP-Dairy), the DMC average feed cost for each month is calculated by summing three numbers:

As noted, the USDA previously announced a January 2019 margin of $7.99 per cwt, but the higher hay price would have cut that to $7.44 per cwt. That would have translated into a January DMC payment of $2.06 per cwt for a producer insured at the $9.50 per cwt level.

Similarly, using the higher hay price, the February announced margin of $8.22 per cwt would have fallen 62 cents to $7.60 per cwt, resulting in a DMC indemnity payment of $1.90 per cwt for a producer insured at the $9.50 per cwt level.

To be clear, the new dairy-quality hay prices are not part of the DMC calculations. They do, however, help call attention to higher feed costs than those using the U.S. average alfalfa hay price.