Casey Havekes
The weeks leading up to calving and the weeks following calving can be extremely challenging for dairy cows. One of the most obvious stressors during this time is the shift from gestation to lactation and the sudden and dramatic nutrient demand for milk production that accompanies this shift.
Casey Havekes

Over the past several decades, researchers have identified pre-calving dietary strategies to promote post-calving success, such as negative DCAD diets and controlled energy dry cow diets. Despite these diets working well from a physiological standpoint, how cows consume these diets and how these diets are managed play a critical role in their success. In the past several years, research has highlighted that non-nutritional dietary management is equally important as the diet itself in terms of maximizing success during the post-calving period. Below are four tips to consider when it comes to non-nutritional management of controlled energy dry cow diets.

1. Chop your straw or hay

Controlled energy dry cow diets typically contain 5 to 10 pounds of wheat straw or mature grass hay in attempt to limit energy consumption to about 100% of requirements while also allowing the cow to consume as much feed as she would like. One of the biggest challenges with feeding these diets is: Unfortunately, straw isn’t high on the list of the cows’ most-sought-after feed ingredients. This introduces the risk of feed sorting, which consequently introduces the risk of cows consuming an imbalanced diet and defeating the purpose of these diets.

Additionally, straw can actually limit intake due to gut fill when not chopped finely. Research from the University of Guelph concluded that when straw was chopped to 1 inch (versus 4 inches), cows not only had higher intakes across the entire dry period, but interestingly they did not have as steep of a drop in intake in the week leading up to calving. Cows sorted against the long forage particles regardless of straw chop length; however, cows fed the 1-inch chopped straw sorted to a lesser extent than cows fed the 4-inch straw. The positive effect of the shorter chopped straw even carried on post-calving when cows were all fed the same lactating diet. Cows that were previously fed the 1-inch chopped straw tended to have lower blood ketone levels three weeks after calving compared to the cows fed the 4-inch straw.

2. Look at consistency across the bunk

Another area that deserves attention when feeding high-straw diets is consistency across the feedbunk. Preliminary research that was conducted on 10 northern New York herds in 2021 highlighted some interesting results related to particle distribution and the co-efficient of variation (CV) on the top screen of the Penn State Particle Separator (PSPS) when cows were fed high-straw, negative DCAD dry cow diets. In this research, we analyzed particle distribution at three locations across the bunk (both sides and the middle), and we found that as the CV on the top screen of the PSPS across the three samples increased, so did the cows’ risk of challenges post-calving (Figure 1). 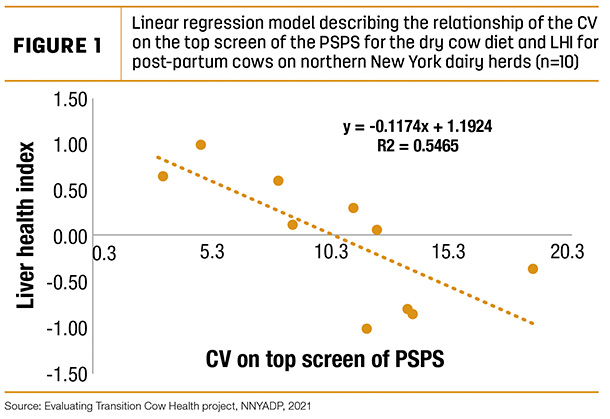 We measured this through a liver health index (LHI) that incorporates liver biomarkers and assigns each cow a value – higher values mean better liver health, and lower values mean poorer liver health. In a previous study, Cornell researchers found that cows with lower LHI had poorer health, milk production and reproductive success compared to cows with higher LHI. The data from this preliminary project, combined with earlier data, highlight an opportunity to better understand the importance of adequate mixing and consistent delivery when feeding these high-straw dry cow diets. To our knowledge, there is no recommended CV for these types of diets. However, our preliminary data suggests a CV under 10% on the top screen across the feedbunk may be a reasonable target. Factors that could impact the CV include proper mixing time, machinery maintenance and mixing order, to name a few.

This next tip goes hand-in-hand with the previous two. Monitoring sorting using the PSPS is a great check and balance for any diet on the farm – but especially for these high-straw dry cow diets that are prone to sorting. Typically, cows will sort in favor of the fine grain components that are found on the bottom screen and the pan (if using the four-tier shaker box), and they will sort against the long forage particles found on the top screen. This behavior increases when the diet fed is physically easier to sort (i.e., particle length is long and cows can easily use their muzzle to sift and sort through the diet). This behavior is problematic with any diet fed because it alters the composition of what remains in the feedbunk for cows that will eat later in the day. A big risk with sorting negative DCAD diets is that some cows may be at risk of not consuming the balanced diet that was formulated for them, thereby increasing the risk of calcium challenges at freshening.

Additionally, when cows sort, they spend more time feeding but do not necessarily have higher intake. Previous research has nicely outlined the importance of pre-calving intake and the risks associated with lower intake in the weeks leading up to calving, so providing a diet and an environment that promotes consistent consumption of the diet is very important. Individual herds can monitor sorting by using the PSPS to analyze fresh feed and refusal feed (approximately 24 hours later). Then, compare the difference in particle distribution between the two points to get a sense of how cows are consuming the diet fed. Most commonly, we’ll see a higher percentage of particles on the top screen and a lower percentage of particles on the bottom screen and in the pan after 24 hours. Some degree of sorting is to be expected, but this exercise can help farms identify if sorting is contributing to transition health issues.

Lastly, it goes without saying that how the feedbunk is managed plays a big role on transition cow success. Previous research concluded that competition at the feedbunk increased displacements and tended to decrease intake in the week before calving. Additionally, those cows that were fed in a competitive setting had a faster feeding rate. Ensure sufficient feeding space (30 to 32 inches per cow), especially in the close-up pen, to promote healthy and consistent feeding behaviors. Feed availability is also an important factor to consider.

Despite decades of supporting research for controlled energy negative DCAD diets, the nutritional part is only one side of the story. How these diets are managed from a non-nutritional standpoint is equally important in terms of stimulating intake pre-calving and promoting a successful transition to lactation. Chopping straw finely, monitoring sorting, ensuring consistent feed delivery across the bunk and promoting a desirable feeding environment are simple strategies to improve success when feeding these diets.