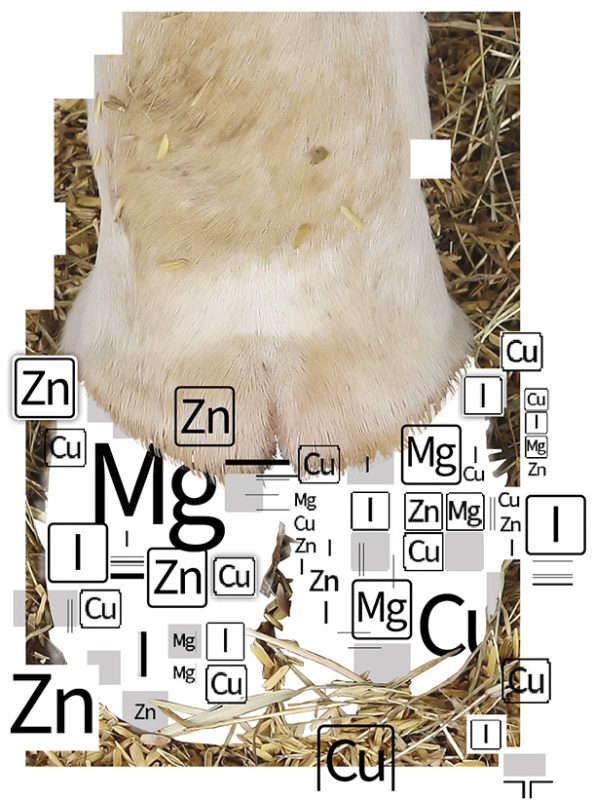 What the revised trace mineral recommendations mean for hoof health

One of the most notable changes to the recommendations was around trace mineral nutrition. Let’s look at the main changes made to the trace minerals that have the greatest impact on hoof health – zinc, manganese, copper and iodine – and outline how each mineral plays a direct role in overall hoof health for dairy cattle.

The NRC previously recommended zinc at 25 parts per million (ppm) for dry cows, with a recent increase in the NASEM to 30 ppm. While the NASEM changes are moving in the right direction, there is still opportunity to adjust levels. Our team actually recommends 75 to 85 ppm supplemental zinc for dry cows. This is because zinc helps prepare hooves for the upcoming lactation, a period when cows undergo greater hoof challenges, thus enhanced lameness risk. For lactating dairy cows, the NASEM requirements for milligrams of zinc increased slightly, but on a ppm level, it stayed within the ranges of the previous NRC, though it did not decrease as much when cows moved later into lactation.

Zinc is critical for the formation of keratinocytes, the basic epithelial cells that have a key role in the formation of hoof cells and harder hooves, which help to improve hoof health. Commonly, producers may begin seeing hoof health challenges beginning in the dry period. This is due to walking, overcrowding and excessive standing. Sometimes, it also can stem from poor flooring in the barns. Zinc is an incredibly important trace mineral for maintaining both growth and hoof hardness, decreasing risk for lameness.

Manganese had an immense change in the recently revised NASEM recommendations, with an increase to approximately 45 ppm for dry cows and 30 to 40 ppm for lactating cows, and I’m very happy to see that. Most of this worthy increase stemmed from how manganese was previously thought to have been absorbed. Manganese was always thought to be absorbed sub-optimally. Because the absorption coefficient was cut in half, that meant the manganese requirement essentially doubled.

Manganese is important for wound healing as it relates to hoof health, especially considering the prevention of digital dermatitis (DD), a bacterial disease primarily affecting the skin of an animal’s heels. Additionally, related to lameness and hoof health maintenance, manganese is important for the development of connective tissue for collagen formation, which aids a cow’s hoof posture, helping prevent lameness.

Copper changed slightly in the recently revised NASEM recommendations, with an increase to approximately 20 ppm for dry cows and a reduction for lactating cows on a milligram basis but had little change based on ppm. The increase in copper during the dry period was due to an increase in the maintenance and growth requirement for those animals. The reduction in copper needs during lactation stem from the fact that the copper requirement for milk production for NASEM is about 25% of the need estimated by the previous NRC. Our team recommends 8 to 10 ppm of supplemental copper to dry and early-lactating Holstein cattle (6 to 8 ppm for Jerseys). We have been conservative in our requirements due to copper’s tendency to accumulate very efficiently in the liver when fed in excess.

Copper is critical for hoof health due to its role in supporting connective tissue formation and hoof hardness.

The NASEM made accommodations for certain feeds, such as canola meal, turnips and raw soybeans or feeds high in nitrates because they have been shown to be antagonistic for the uptake of iodine. Previously, the NRC recommendations were approximately 0.4 to 0.5 ppm iodine. These recommendations have not changed much; however, NASEM now reduces the absorption coefficient by half with the presence of the aforementioned feeds, which increases the recommendations to approximately 1 ppm. We have long recommended routinely feeding 1 ppm because we know a lot of farms feed iodine-antagonistic feeds on a regular basis. Whether producers are feeding raw soybeans, canola meal or something similar, we want to have iodine levels high enough to avoid a potential deficiency issue.

Iodine plays an important role in a cow’s immune system, especially as it relates to her hoof and skin health. From a therapeutic level, iodine also helps aid infectious lesions, foot rot and DD.

While we saw the greatest NASEM changes regarding these trace minerals – zinc, manganese, copper and iodine – there are other minerals important to hoof health not to be overlooked. One such example is cobalt, which is utilized by the ribbon microbes to make vitamin B12 and helps to make glucose that is needed to generate new hoof cells or keratinocytes.

By not meeting these recommendations from the NASEM, the industry risks setting up cows for nutrient deficiency, which can take up to a year to recover from, plus the costly hoof health and lameness challenges that go along with it.

Lameness issues can range from hoof lesions and infectious lesions, such as DD, to non-infectious claw lesions, such as sole ulcers or white-line lesions. While lameness causes short-term pain and distress to dairy cattle, it can also have long-term consequences on animal productivity and negative consequences to a producer’s bottom line. While the cost of simply treating lameness in cows can be significant – amounting from $90 to $300, according to the University of Wisconsin Extension – lameness also leads to reduced milk yield, reduced fertility and higher culling rates.

Trace minerals: A tool in your toolbox

Trace minerals are an important tool in your toolbox, but not to be overlooked are management strategies to help prevent hoof health issues from impacting the herd. Trace minerals are significantly important, but producers will also want to ensure:

When you do have those stressors, trace minerals can help, but we certainly want to address the bottlenecks on the farm as well and prioritize management best practices for the prevention of lameness and hoof problems.

Share this insight and the latest NASEM recommendations with your nutritionist and herd health veterinarian to develop a well-rounded program to help your herd reach their best potential.

Daryl Kleinschmit is a discovery researcher with Zinpro

For more than 50 years, Zinpro has improved the health and wellbeing of both animals and people as a pioneer in the research and development of performance trace minerals and innovative solutions.