Here’s Progressive Dairy’s monthly review of the numbers to provide some additional transparency on your milk check.

The strong uniform prices were supported by higher prices for three of four FMMO milk classes in June:

The value of milk protein dipped more than 45 cents from May to about $3.42 per pound. Despite the decline, the protein price is no slouch; the June value was above $3.40 per pound for a third straight month.

Average butterfat, protein and nonfat solids tests in pooled milk were down slightly from May in a handful of FMMOs providing preliminary data.

With butterfat, protein and SCC premiums, the uniform prices “at test” will be at least $2 per cwt higher than statistical uniform prices in most FMMOs utilizing multiple component pricing. 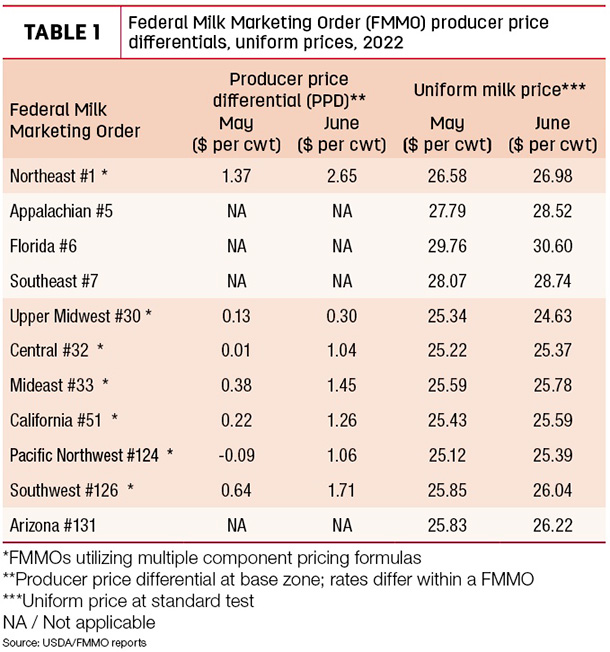 June baseline PPDs were higher in applicable FMMOs, although changes from May diverged widely (Table 1). The June PPD was up 17 cents in the Upper Midwest but more than $1 higher than May in Northeast, Central, Mideast, California, Pacific Northwest and Southwest FMMOs. PPDs have zone differentials, so actual amounts will vary. Also, individual milk handlers apply PPDs and other deductions to milk checks differently.

Overall milk pooling in June was down about 500 million pounds from May at 12.1 billion pounds. The larger June Class III-IV price spread brought more Class III milk back in FMMO pools – but kept a lot of Class IV milk out.

You can get a general picture of FMMO pooling-depooling in a couple of ways: on a volume basis, comparing monthly pooling totals to previous months; and on a percentage basis, comparing the percent utilization of a specific class of milk relative to all milk pooled that month. 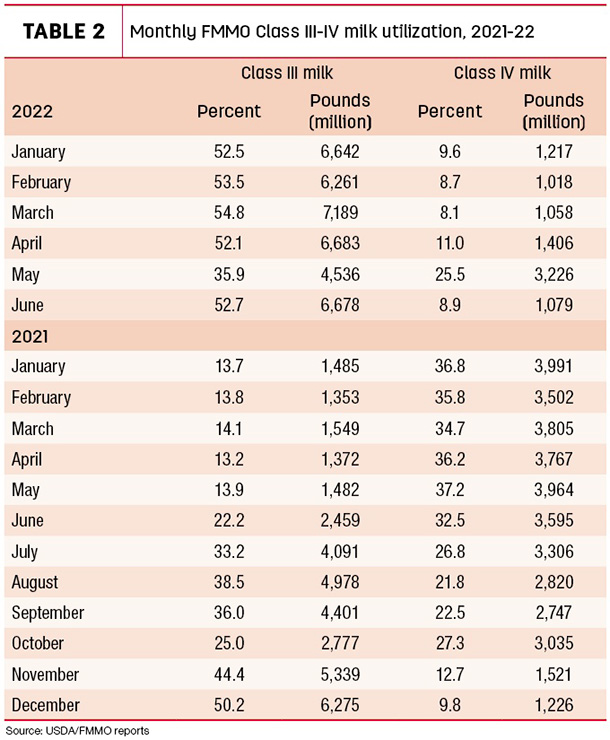 The outlook for July prices remains strong, although there will likely be a slight downturn.

Even though the Class I base and individual FMMO Class I prices were unchanged in July, the newer Class I mover average-of plus 74 cents formula slightly reduced Class I prices paid to producers compared to the previous higher-of formula. Based on Progressive Dairy calculations, the Class I mover calculated under the higher- of formula would have resulted in a Class I base price of $25.94 per cwt, 8 cents more than the price determined using the average-of plus 74 cents formula.

The USDA’s monthly World Ag Supply and Demand Estimates (WASDE) report, released July 12, revised the 2022-23 U.S. milk production estimates lower due to slower growth in milk per cow than previously expected. With the outlook for production lowered, projected farm-level milk prices were raised for 2023. However, since that outlook there has been recent weakness in futures prices.

There are also a lot of ideas emerging regarding potential reforms to FMMO and other dairy policies, through either a formal FMMO hearing process or the 2023 Farm Bill. Find recent Progressive Dairy coverage here: