Making a profit from the cows you have: Kreider Farms

Matti McBride
If you live in the northeast U.S., odds are you’ve seen a green and yellow logo gracing the packaging of milk or ice cream in your local grocery store.
Matti McBride

Shipping to over 100 retail stores from Vermont to Virginia, Pennsylvania to New York and everywhere in between, Kreider Farms is a familiar brand to most households. The Manheim, Pennsylvania operation owns 3,000 acres, 1,700 Holsteins and four modern egg facilities full of hens, and is the “only full-scale egg and dairy farm in the U.S.”

What began as a 100-acre chicken and cow farm is now a thriving business, milking cows three times a day in a state-of-the-art carousel parlor and processing all of the milk in their own processing plant, just a quarter-mile from the dairy.

Committed to herd improvement, Kreider Farms carefully manages the reproductive side of their 1,700 Holsteins. They began genomic testing in 2016 with the goal to improve the longevity, milk production and health traits of Kreider’s animals.

“We really wanted to raise our profitability through the cows we’re already milking,” says Mike Hershey, dairy manager. “We’ve made a surprising amount of profit through culling and pulling out the bottom-end heifers at weaning; we’re not in a position to grow or even planning expansion, so we’re managing our heifer inventories very closely.”

Kreider Farms works with the top 80% of their animals, using the bottom 20% as recipients for embryos. They also use sexed semen on all heifers and the top 25% of the milking herd, while using beef semen on the bottom 75%.

“Our ideal cow is a moderately sized Holstein, with a good amount of dairyness but a capacity for high milk production,” Hershey says. “Good udders and feet and legs are important to us, along with a high Productive Life. We haven’t used a negative DPR bull in years, and we like animals that are positive on fat and protein percentages. Type usually comes along with those things, but we’re not really breeding for show type necessarily, just a moderate, long-lasting, functional cow.” 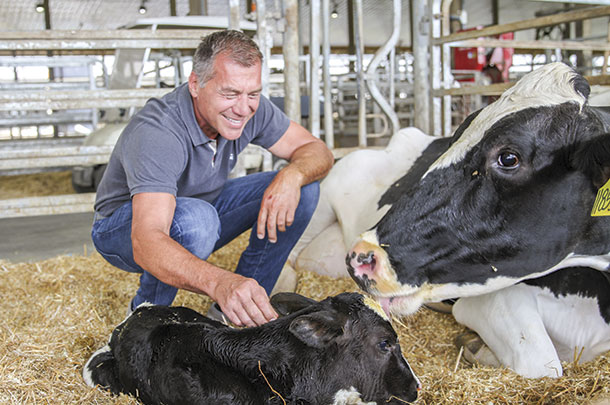 Using only the top 10% of Holstein bulls in the breed, along with genomic testing, extensive flushing protocols and culling the bottom end of their animals has helped Kreider Farms achieve that ideal cow. To breed that ideal cow back, Hershey implements a timed A.I. protocol, using Presynch for first service and breeding first-lactation animals at day 85. Second-or-higher-lactation animals are bred at day 75, with an activity monitoring system in place to catch return heats and making further breeding decisions.

“Kreider Farms has been genomic testing with us for a long time,” says Dave Erf, a geneticist with Zoetis. “They have been able to craft a herd that is better built for the challenges of the future. This is a herd that will be less susceptible to disease, produce more milk and are ultimately more profitable.”

Because Kreider Farms processes 90% of their own milk, some of their production goals might look a little different than most commercial dairies.

“We don’t breed specifically for a lot of protein pounds because we’re not getting paid for it,” explains Hershey. “Components are just a bonus; we are a little heavier on the fat side of things because that’s helpful when it comes to making ice cream and half-and-half and things like that. We’re definitely more volume-based.”

With seasonal treats like pumpkin milk and eggnog, Kreider has a product for any time of the year. Though they sell regular, chocolate and strawberry milk alongside heavy cream, half-and-half and buttermilk, Kreider’s ice cream is a favorite of many and has won several national awards.

In addition to improving their herd, Kreider Farms is also committed to practicing sustainability on their facilities. Recycling wastewater as fertilizer and using waste solids as bedding for their cows, Kreider also produces their own potting mix made from chicken and cow manure. They implement no-till farming and crop rotation to keep precious topsoil intact, and Kreider Farms is 100% non-landfill – with all processing waste being turned into energy. In 2008, they earned the Environmental Excellence Award from the U.S. Poultry and Egg Association and, in 2014, opened a Sustainability Park in collaboration with Northwestern Lancaster County Authority, a 4-acre park that neighbors Kreider Farms.

One thing that sets Kreider apart from operations like theirs is their strong emphasis on animal welfare. Kreider Farms’ dairy is American Humane certified, one of only four dairies in the U.S. to receive this certification and dedicated to using humane animal welfare practices.

“I have two binders that are about 4 inches thick that are reviewed each time we are audited,” Hershey says. “We’re audited once a year to maintain that certification and very proud to hold that status.”

With daily tours of the facilities, Kreider Farms heavily encourages agritourism and welcomes all to the dairy, giving around 500 tours each year.