Dave Natzke
March 2022 milk production was slightly lower than a year earlier, but higher milk prices are bringing more cows back into the herd.
Dave Natzke

Reviewing the USDA preliminary estimates for March 2022 compared to March 2021:

While still below year-ago levels, U.S. cow numbers increased for a second consecutive month. March 2022 U.S cow numbers were up 15,000 from the revised February estimates, which were revised 10,000 head higher from last month’s preliminary report. March 2022 cow numbers are still down about 112,000 head from the peak in May 2021.

Compared to a year earlier (Table 1), March 2022 cow numbers were reported higher in just six states and lower in 15 states; Idaho, Iowa and Vermont were unchanged. For a fifth consecutive month, it was South Dakota atop the year-over-year growth tables, up 30,000 head from March 2021, followed by Texas, up 22,000 head. Compared to a year earlier, cow number declines were heaviest in New Mexico, Michigan and Washington. 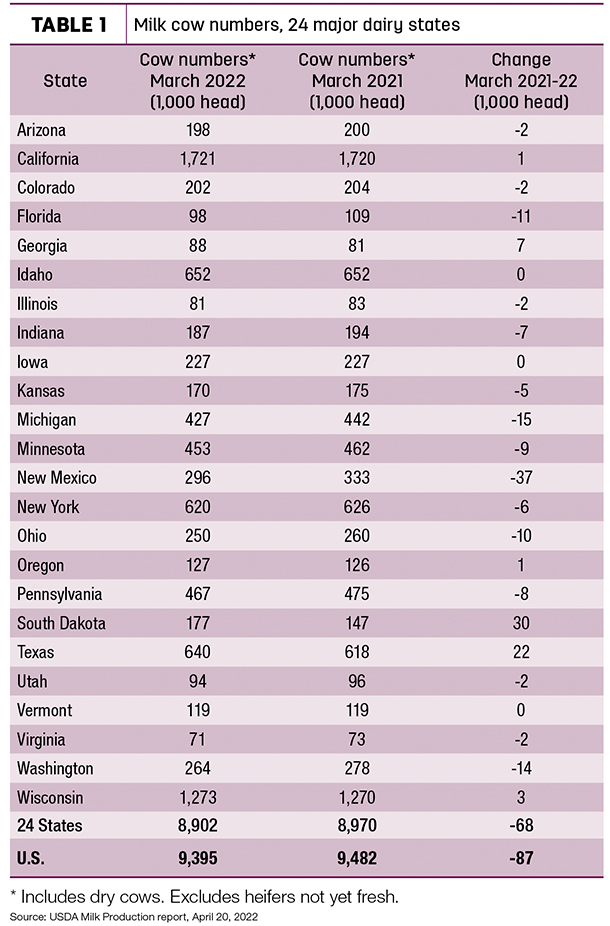 Compared to a month earlier, Texas cow numbers increased by 7,000 head, with New Mexico up 4,000 head.

Contributing to the growth in cow numbers, cull cow slaughter continues at a slower pace to start the new year. Through April 2, weekly slaughter in federally inspected plants totaled 891,100 head, about 26,200 head fewer than the same period a year earlier.

U.S. monthly milk production per cow was up slightly from year-ago levels, up 8 pounds from March 2021. Among the 24 major dairy states, output per cow was up 7 pounds (Table 2). 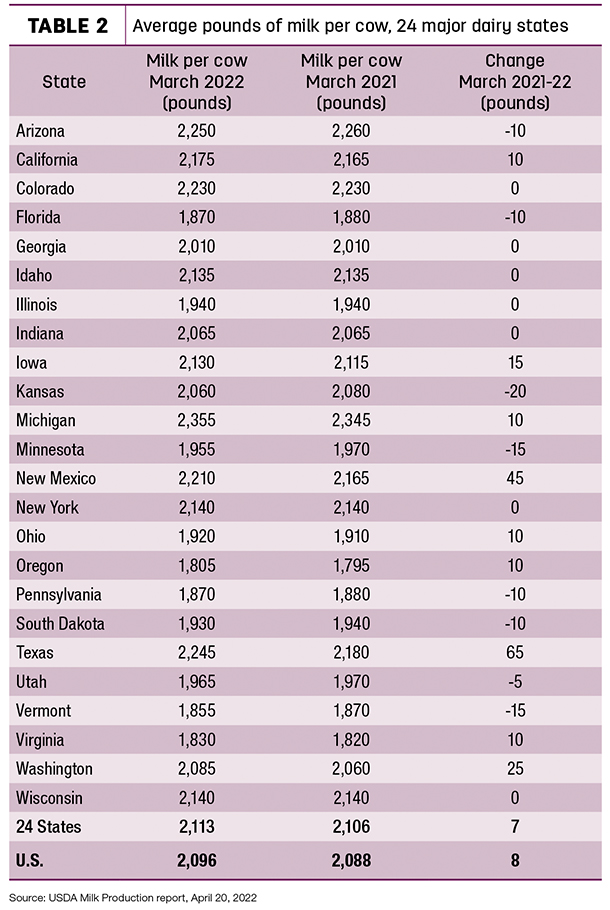 Year-over-year milk per cow increased in nine states, led by Texas and New Mexico, up 65 and 45 pounds per cow for the month, respectively. Lower output per cow occurred in eight states, led by double-digit declines in Kansas, Vermont, Minnesota, South Dakota, Pennsylvania, Florida and Arizona.

Michigan maintained its lead over Colorado in milk output per cow.

With higher output per cow offset by lower year-earlier cow numbers, overall milk production was down slightly in the U.S. and among major dairy states.

With March estimates, U.S. milk production during the January-March quarter totaled 56.3 billion pounds, down 1% from the same quarter last year.

The average number of milk cows in the U.S. during the quarter was 9.38 million head, unchanged from the October-December 2021 quarter but 85,000 head less than January-March 2021.