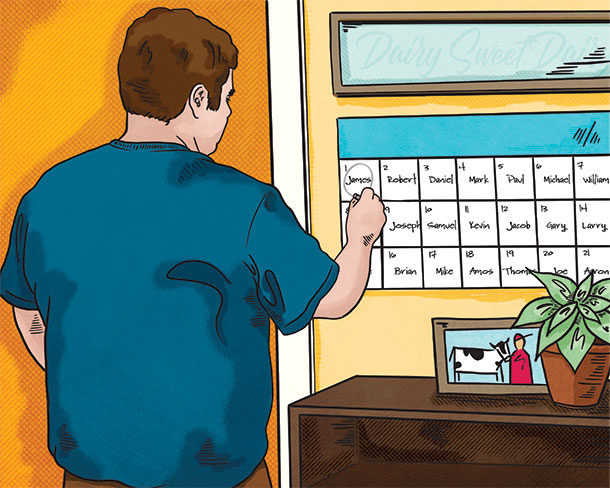 Mark’s wife (the farm’s bookkeeper) suddenly told them the farm’s cost of production was 13% higher due to increasing input prices. The boys were faced with the stark realization: Their first year farming without Dad, they were bleeding cash. What made the moment more dire was the realization that most of the equipment was 8 years old, and if they couldn’t buy replacement equipment from cash flow soon, broken-down equipment mid-harvest would become a way of life that would spiral them into a situation their dad had warned them about.

Although I didn’t see a tear, it was a silent, emotional moment that reflected the stark reality of the situation.

This was my first meeting with them. I explained my process to the boys:

“Each week we plan out together who is doing what, so nobody is the other man’s slave. Then, each week, we’ll sit down to brainstorm one way you boys can work better together and one way to squeeze out more farm profit. If you make 52 changes in these two categories over the next year, that will lead to over 100 improvements to your farm, and it will look completely different in a year’s time.”

They agreed that the process of continuous improvement made sense, and they agreed to meet the following week, bringing ideas on how to squeeze out more efficiency.

Next week flew by and Mark was first up. He presented three solid ideas to the table which we were all pretty impressed by. But Jeb came to the table with nothing.

He quickly excused himself, “Dad always ran a tight ship. You tell me how we can squeeze another nickel out of this place. I did my research just like Mark. If I had another idea, I would have done it by now. You tell us how to farm. That is why we are paying you.”

I directed the next question to Jeb. “When you went to college, your brother would probably be found poring over books in the library, but I can picture a lot of your learning came by talking to your friends about farming over a case of beer, right?” Jeb grinned, “Yeah …”

I knew a lot of guys like Jeb who soaked up knowledge and ideas a lot better while talking to his neighbor for 20 minutes than by reading a textbook for two hours. I challenged Jeb right there. “Over the next 21 days, why don’t you call one friend a day who is a farmer and tap him for an idea on what worked for them over the past few years that made some sort of improvement to their operation. Just make sure the ideas don’t cost an arm and a leg (like buying a new piece of equipment), but rather something simple like tweaking your planting rate. In three weeks, you’ll have 21 ideas on how to squeeze out farm profit, and I’m certain 10 of those ideas could be game-changers that could turn your situation around to make this a profitable year, no matter how bad crop prices get.”

So that is what he went and did. At each weekly meeting, he came to the table with several ideas he gathered through talking to a farm buddy – and over the period of a month, it completely changed the outlook for that farm. What Jeb found most interesting was that the farmers he called in the third week weren’t friends he’d normally reach out to (a few he really didn’t like), yet they were the contacts who gave him the best ideas.

Mark also took the 21-day challenge, calling a friend a day too. He might be a bit nerdy and like reading Progressive Dairy, but that doesn’t mean he doesn’t have a lot of farming friends too.

Commodity prices are high in 2022, but what is critical to survival in the long run is rethinking everything – proactively – and that you make changes with limited capital during high times so you can survive future lows. This only happens when you can get past butting heads and make real decisions with your partners.

On Jeb and Mark’s farm, each week in the later half of 2020, the two brothers met and worked through which ideas to try, which to put on the back burner and which to throw out with the bathwater. Their cost of production per bushel of corn was $3.40 in July 2020, and a year later was just under $3.

To access Andy Junkin’s free masterclass: “Farming with your Stubborn Family” or listen to his audiobook
“Bulletproof Your Farm,” go to Agriculture Strategy.