In Focus: An in-depth look at fluid milk consumption

Even though total per-capita dairy consumption has increased about 100 pounds since 1982, fluid milk’s consumption decline has not only been cited as a nutritional concern, but also more recently as influencing blend prices and producer price differentials calculated through Federal Milk Marketing Orders (FMMOs).

While milk producers, processors and marketers have long recognized U.S. consumers are “eating” more dairy than they drink (Read: “Dairy consumption: Pandemic’s impact measured in ounces,” in the Nov. 7, 2021 issue of Progressive Dairy), a team of economic analysts with the USDA Economic Research Service (ERS) sought to identify who in the U.S. population is consuming fluid milk and discover how those consumption patterns changed.

Their newly released report, “Examining the Decline in U.S. Per Capita Consumption of Fluid Cow’s Milk, 2003-18,” provides an in-depth look at three primary occasions when fluid cows’ milk is consumed during the day: as a beverage, poured on breakfast cereal or when added to another beverage.

They explored changes in both the percentage of each age group consuming milk and the volume of milk consumed on a daily basis across the entire population, including individuals who consumed no milk.

Historically, the USDA ERS uses data on the amounts of foods available for human consumption, using quantities sold by fluid processors as a proxy for actual consumption of fluid milk. Consumption in this study was measured using dietary recall data collected through the National Health and Nutrition Examination Surveys (NHANES), a survey designed to assess health and nutritional status.

A look at the numbers

The researchers found both the percent of the total population consuming milk and the volume of milk consumed per person has declined during two of three “occasions” (Table 1). 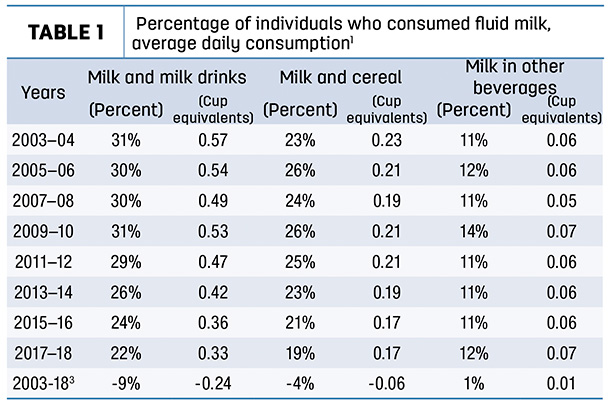 Based on USDA dairy data, declines in annual per-capita fluid milk consumption have been steady and gradual, spanning multiple decades and dropping more than 100 pounds per person between 1975 and 2020. One concern identified in the ERS study notes the rate of decline picked up pace in the 2010s compared with previous decades.

Between 2000-10, milk consumption per person fell at an average annual rate of 1%. However, the rate of annual decline grew to 2.6% during the 2010s, despite substantial investments in promotional efforts financed by two national checkoff programs, the dairy producers’ National Dairy Research and Promotion Program, and the milk processors’ Fluid Milk Processor Promotion Program. 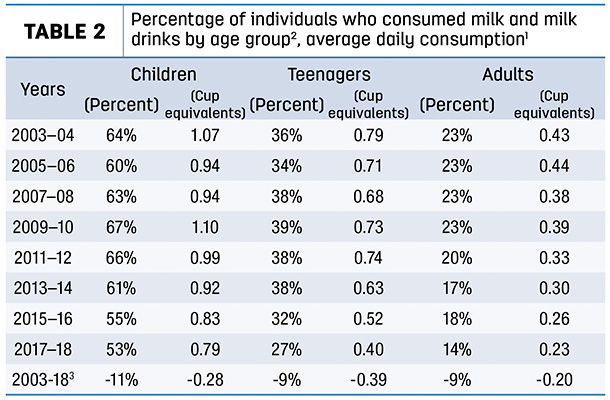 Overall, the proportion of consumers drinking milk and/or milk drinks on a given day was relatively constant from 2003-04 through 2009-10, fluctuating from about 30% to 31%. However, in the second half of the study period, the proportion declined, falling to 22% in 2017-18. The average amount consumed per day – including individuals who drank no milk or milk drinks – was 0.57 cup-equivalents in 2003-04 compared with 0.33 in 2017-18. This decrease is statistically significant.

Changes in breakfast options have cut into milk consumption, as breakfast bars, breakfast meals offered by fast-food chains, yogurt and other morning-time options are substitutes for breakfast cereal. 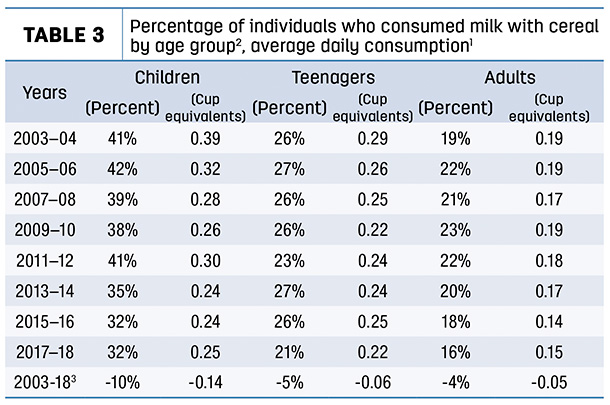 Adding to other beverages

A third way people consume fluid cows’ milk is by adding it to other types of beverages not included among dairy milk and dairy milk drinks, like coffee and tea (Table 4). 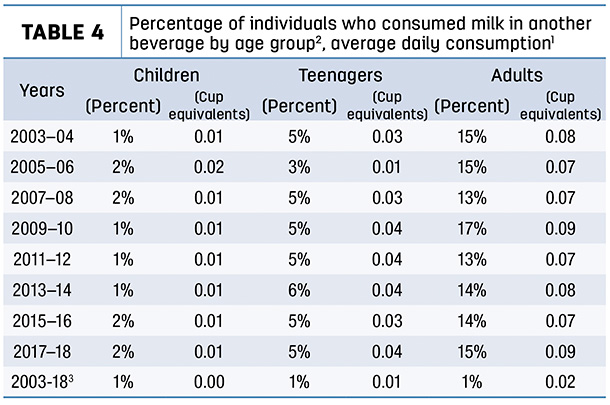 Although per-capita consumption of milk in this form is relatively small, it’s one area that has exhibited more consistency in consumption over time, both in the percentage of consumers as well as the volume of milk consumed. In 2017-18, individuals consumed about 0.07 cup-equivalents per person per day this way, about the same amount as in 2003-04.

Finally, the ERS team looked at where children and teenagers consume milk, comparing consumption of milk drinks at home, in school and other places (Table 5). 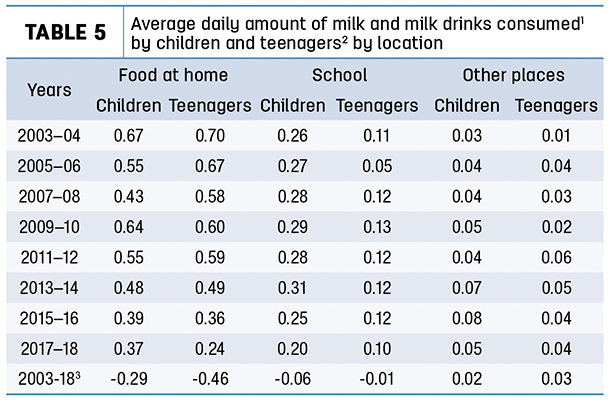 While consumption declines were more dramatic at home, consumption at school has also declined. One topic frequently targeted by dairy organizations as a reason for declining milk consumption in school is the Healthy, Hunger-Free Kids Act of 2010, which limited schools participating in federal lunch and breakfast programs to serve lower-fat milks, beginning with the 2012-13 school year.

Other findings and factors

Previous studies of U.S. Commerce Department/Bureau of Census data indicate the U.S. is growing racially and ethnically more diverse. Non-Hispanic Whites tend to consume more milk than other racial and ethnic groups. Between 2010-19, non-Hispanic Whites decreased from 63.7% to 60% of the U.S. population.

The U.S. population is also older, a factor since children and teenagers consume more milk per capita than adults. Between 2010 and 2019, individuals younger than 10 years old decreased from about 13% to 12% of the total U.S. population. Those aged 10 through 19 years decreased from 13.8% to 12.6%.

Among other factors impacting milk consumption, prices for milk are more volatile than prices for most other types of beverages, but the study concluded that price was not a primary driver of long-run consumption trends. And while an increase in the consumption of plant-based dairy alternatives is negatively affecting milk sales, that increase is much smaller than the decrease in sales of fluid cows’ milk and explains only a small share of overall sales trends.

Today’s trends can have long-term ramifications. Milk consumption habits learned as children generally carry over into adulthood. Studies indicate that as successive generations of children and teenagers who grow up less accustomed to consuming milk than their preceding generation will maintain those habits.

The study also identified rising nutrition concerns. According to the 2020-25 U.S. Dietary Guidelines for Americans, children ages 2 through 10 years should consume 2 to 3 cup-equivalents of dairy products per day (with specific quantities based on age, gender and level of physical activity), while those older than age 10 need to consume 3 cup-equivalents. The ERS team concludes that about 90% of individuals do not consume enough dairy products to meet federal dietary recommendations.