Maximize returns from your beef x dairy breeding program in 2022

Increased use of sorted dairy semen can achieve more female calves to replace existing cows or to expand the herd without significantly impacting conception rates. A ready supply of replacements provides more options to replace cows that are low-producing, have reproductive problems or are not healthy.

Genomic testing accelerates a herd’s overall genetic progress when the highest-genetic-merit cows and heifers are bred with sorted dairy semen. Currently, there are more breeding options than just use of conventional or sorted dairy semen. Typically, the most valuable animals (heifers and higher-genetic-merit, first-lactation cows) were bred to sorted dairy semen at first service. Conventional semen usually was used for later services. When readily available A.I. beef semen is coupled with higher revenues for a beef x dairy calf, an ever-increasing proportion of animals are being bred to beef semen.

With so many options available, including using cows as embryo donors or recipients, how can a producer determine the best breeding option for each animal and maximize returns? Having access to individual cow info for production, reproduction, health and genetics is key to making the most informed decisions.

This article shares several breeding trends observed in the U.S. from 10 million DRMS breeding records collected from July 2019 through August 2021. In addition, several tips and tools explain how data collected through DHI can improve breeding decisions and help maximize returns from a breeding program.

Figure 1 illustrates the type of semen used for Holstein and Jersey breedings during the recent two years. 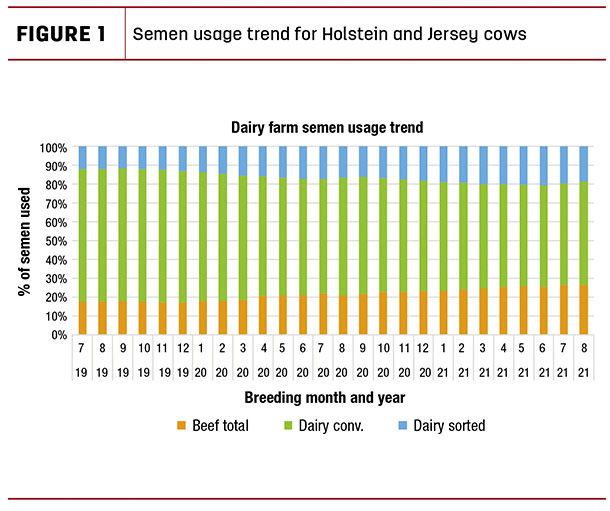 Based on this two-year period, it is clear there has been an increase in use of both beef semen and dairy sorted semen, which has resulted in reduced use of conventional dairy semen. Overall, almost 45% of breedings of Holstein and Jersey cows are now performed using dairy sorted or beef semen.

Another observed difference relates to semen usage based on herd size. Figures 2 and 3 show the distribution of semen usage for herds between 100 and 249 cows versus herds over 1,000 cows, respectively. 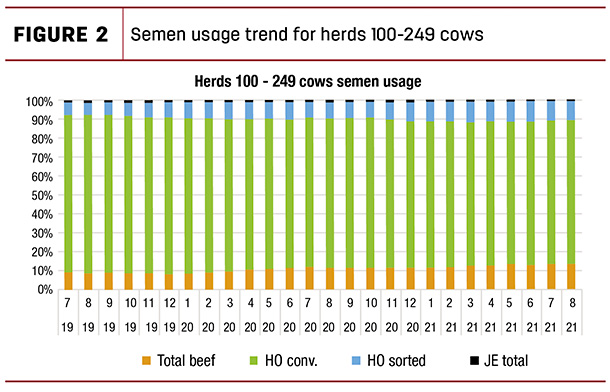 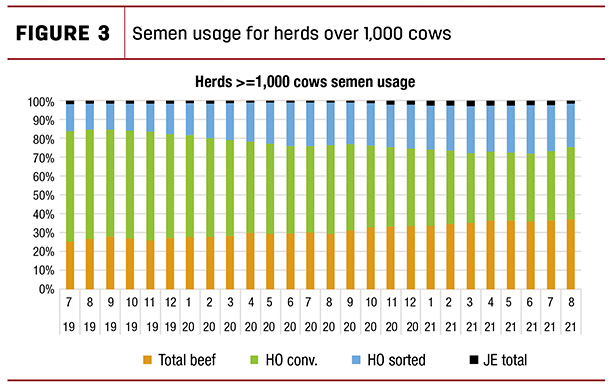 Based on DRMS data, smaller herds used a substantively lower percentage of beef semen and sorted semen than larger herds. This trend did not change much in the recent two years, while the trend in larger herds was to use more beef and sorted dairy semen and less conventional dairy semen.

Which beef breeds are being used?

Another question frequently asked is: “Which beef x dairy cross makes for a better beef calf?” When choosing which beef bull to use, the primary concerns are bull fertility and calving ease. However, some beef breeds yield better carcass traits, which can impact the quality of the calf and price that calf may fetch at the livestock market.

Using the DRMS breeding data, we were able to determine trends by beef breed. Figures 4 and 5 show the distribution of beef semen used to breed Holstein cows in July 2019 compared to July 2021. 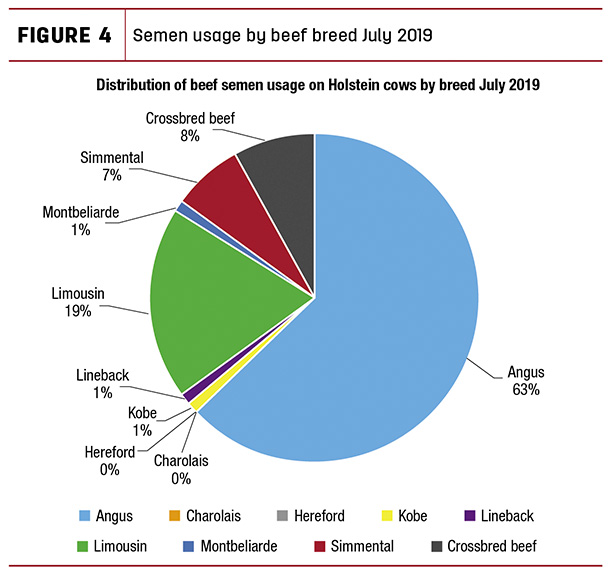 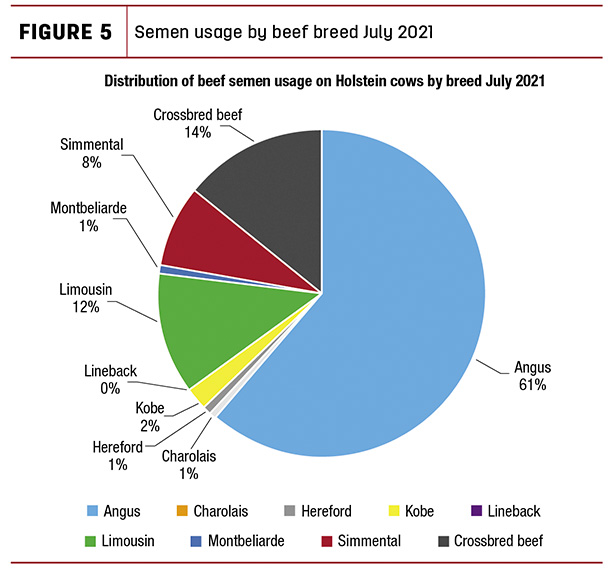 In this two-year lapse, there was a slight shift in which beef breeds dairy farmers used. While breeding Holstein cows to Angus bulls is still the predominant choice, use of crossbred beef bulls has increased, while use of Limousin and Angus bulls has dropped.

Semen usage based on parity and breeding number

With easier access to replacement animals and improved fertility, producers have lowered the threshold in terms of how many times they will breed a cow before deciding to stop breeding and replace her. Therefore, as the number of times a producer will breed a cow before considering culling has dropped in the past five years, the decision process to breed with three choices of semen at hand has changed significantly. A fourth option for herds that consider embryo transfers is to use a low-genetic-merit cow as a recipient.

Table 1 shows a comparison based on parity and service number, and the type of semen used on Holstein cows. 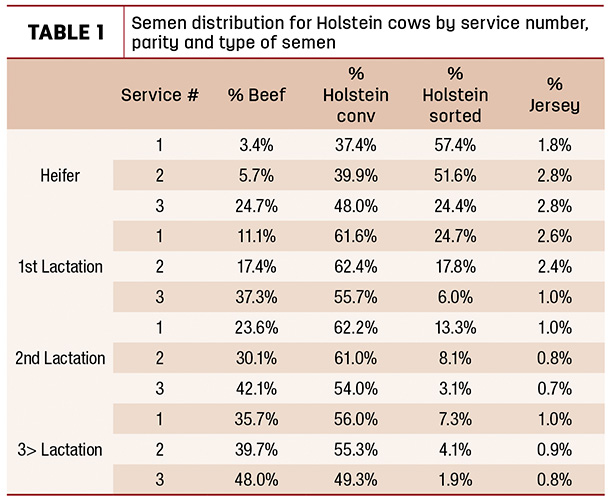 More than 50% of heifers were bred to sorted semen on first or second service. This makes sense because these should be genetically superior animals and because breeding these animals with sorted semen should yield the greatest number of female offspring to use as replacements. Interestingly, by the third service, the percent of breedings to beef semen on heifers is almost 25%. Additionally, the use of beef semen increases rapidly with lactation number. Eleven percent of first-lactation cows were bred to beef semen on first service. It increases to 35% of third- and greater-lactation cows.

How to improve the decision-making process?

As shown in the DRMS breeding data, the two-year trends are for increased use of beef and sorted dairy semen, especially in larger herds. Additionally, producers used less conventional dairy semen on later breedings. Sorted semen use was most prevalent for heifers and first-lactation cows on the first or second service. Conventional dairy semen still has a large role to play. For older Holstein cows, producers used conventional semen for 50% to 60% of second or third services. As the percent of sorted semen use goes down by service number or lactation number, there was an increase in use of beef semen. On later services, deploying conventional dairy semen rather than beef semen is a reasonable strategy to produce replacements from cows with good production and superior genetics.

A typical decision-making progress can be summarized as follows:

1. Should I milk this cow (or heifer) for another lactation or should I replace her?

a. If the animal is a heifer, what is her genetic rank and what was her dam’s performance?

b. If she is a cow, is she a good producer with few health problems, and what is her genetic rank compared to herdmates within the same age group?

2. If I decide to milk a cow for another lactation, is she likely to produce a high-genetic offspring?

a. Compare her genetic rank to other cows.

DHI can provide you with the data you need to answer some of these questions. Production data such as lactation records, breeding information and dam production information can all be obtained through DHI, but you need to make sure your data is submitted to the Dairy Records Processing Center (DRPC). To obtain genetic information, you need to identify the calves, preferably at birth, with a unique official ID (i.e., the 840 number) and correctly record the sire and dam of the animal in your herd management records. Ensure these records are sent to the DRPC – and, in return, the DRPC will be able to obtain genetic information on newborn calves from the Council on Dairy Cattle Breeding (CDCB). Another option is to have your calves genomic tested, and this will also provide you with the genetic data from CDCB.

Several reports can improve the decision-making process. For example, the Heifer Genomics Guide includes NM$ value and rank for genomic-tested heifers. The Heifer Genetics Monitor offers a similar listing for all heifers (genomic or not genomic tested).

Producers using PCDART create their own reports to customize decision-making information. For example, the example report below selected heifers between 9 and 12 months old grouped by NM$. The goal of this example is to breed the top 50% of heifers to dairy sorted semen, 30% to conventional dairy semen and the bottom 20% to beef semen.

Utilizing the NM$ values on each heifer and setting a control based on age, we assigned the eligible cows to each of the three groups. Figure 6 shows the distribution of animals by the three Net Merit groups, while the image below shows an example of the cow list assigned to each breeding group. 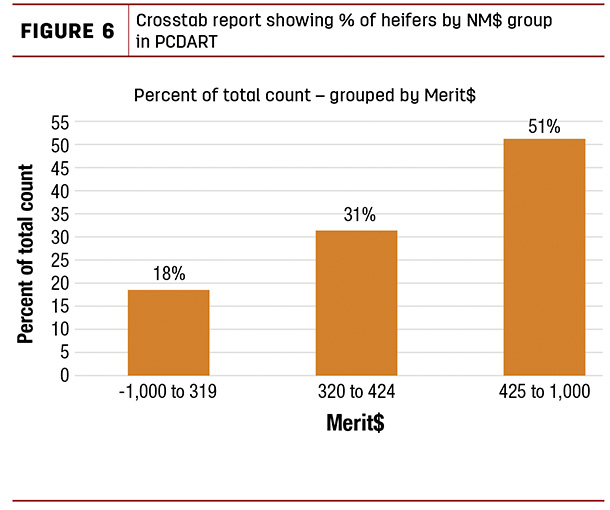 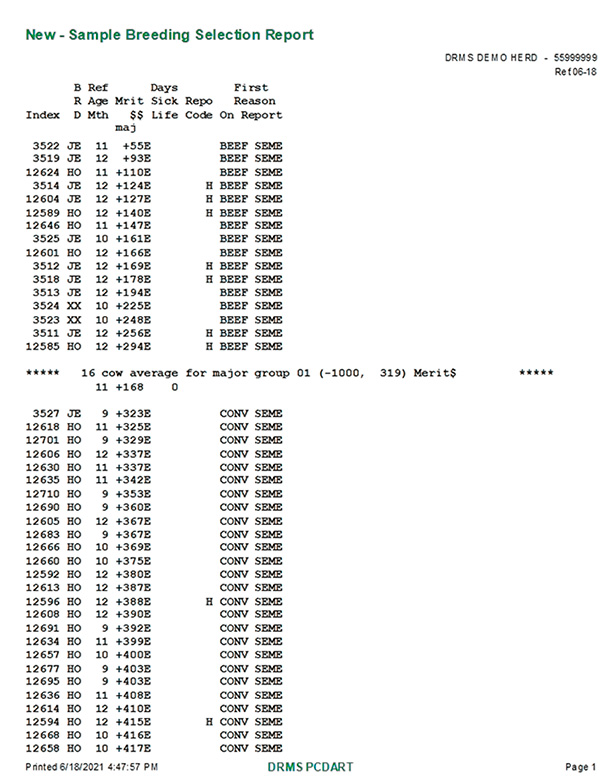 Dairy producers have more breeding options available to them today, and there are more options on the horizon (i.e., sorted beef semen). Making the best breeding and culling decisions requires access to good-quality data and tools that can quickly sort through large quantities of data. Obtaining genetic data on your heifers and cows coupled with information about cow production, reproduction and health offers the best solution to make optimal breeding decisions.