Aerating soils: Hardpan is no longer a hard fight

Although vertical tillage equipment has been around for many generations, aerators have become very popular as an efficient way to retain more moisture, alleviate compaction and hardpan, and stimulate plant growth. Most producers would agree soil health is a top consideration when utilizing the remaining precious acres of farmland throughout the world. The same logic applies to the long-term sustainability of soil conservation practices that continue to stress the importance of maximum production per acre with a positive bottom line. Inputs and nutrient supply are a variable we are programmed to focus on as growers; however, “soil sustainability” still seems to be the elephant in the room, and it is difficult to conquer and often avoided.

When most people picture an aerator, the view of a residential yard with thousands of small cylindrical soil probes that have been removed and are sitting on top of the turf comes to mind. When the vertical tillage term is used, one tends to picture a tandem offset disc or a subsoil chisel. For agricultural purposes, aerators typically look considerably different, and they fall into the rotary tillage category.

Agricultural aerators typically have large blades that can make an incision into the soil and penetrate the rhizome layer roots, allowing nutrients and water to get to a depth faster and with less resistance to where it is most beneficial for the plant. When a competent aerator enters the soil, it can create a fracture in the ground like that of vertical tillage equipment in the right conditions.

The functional difference between vertical tillage equipment and an aerator is that aerated fractures do not stop at the depth of the cut; they fracture the soil significantly deeper than the cut, allowing moisture and nutrients to follow the path of least resistance to a safe depth for storage and plant utilization.

Excessive weight and proper blade selection are key elements to the success of deep fractures and root stimulation. The act of shattering hardpan and alleviating compaction is something an aerator does very well and, depending on the type of aerator, can do so in a no-till operation. The lack of resistance from compaction allows water and nutrients to stimulate a forage crop and promote deeper root growth versus shallow and root-bound rhizome layers.

As no-till farming practices have become mainstream in the last number of years, we are losing, in some respect, the ability of our crops to produce in the soils that are dealing with higher rates of compaction. Vehicular traffic, freeze-thaw cycles, grazing and atmospheric conditions are contributing to compaction-related problems, especially those seen in drier areas and clay soils. As the world is faced with less water, less topsoil due to erosion and changing weather patterns, it’s showing us the value of long-term soil health and water management.

Water management is as simple as standing water in a field. If there is standing water, there is likely a compaction-related problem contributing to the reason the moisture is running off the higher elevation areas. Efficiency losses during harvesting operations and production losses caused by unusable land occupied by standing water need to be avoided – and if not, treated as a compounding problem. Water in a low-lying area is water that can contribute to bottom-line production numbers of the crop if the water can be utilized where it lands.

The goal is for people to not only be producers, but stewards of the land. Dependency on fertilizers is rising, so maintaining precious soils and only adding deficient nutrients is an immediate fertilizer cost savings for the grower, and a very large benefit to the rivers and streams that are receiving unwanted nutrients and chemicals. The natural nutrient cycle in a soil needs to continually move through soil, while incorporated organic matter breaks down into usable nutrients, eventually contributing to yields.

Soils should not be a restrictive environment; they should be an encouraging place to retain nutrients and sustain growth. When soil has become compacted, water tends to run horizontally across the surface into the soil instead of vertically, which eventually removes the topsoil off the land along with nutrients that eventually end up in our oceans. Limiting water and oxygen from soil has long-term detrimental effects. Compacted soils are more susceptible to wind erosion due to the exposure of bare soils to the atmosphere. On a dry field battling hardpan, how much moisture is retained when fierce short rains fall from the sky? The sad truth is: It’s not likely as much as we would hope. 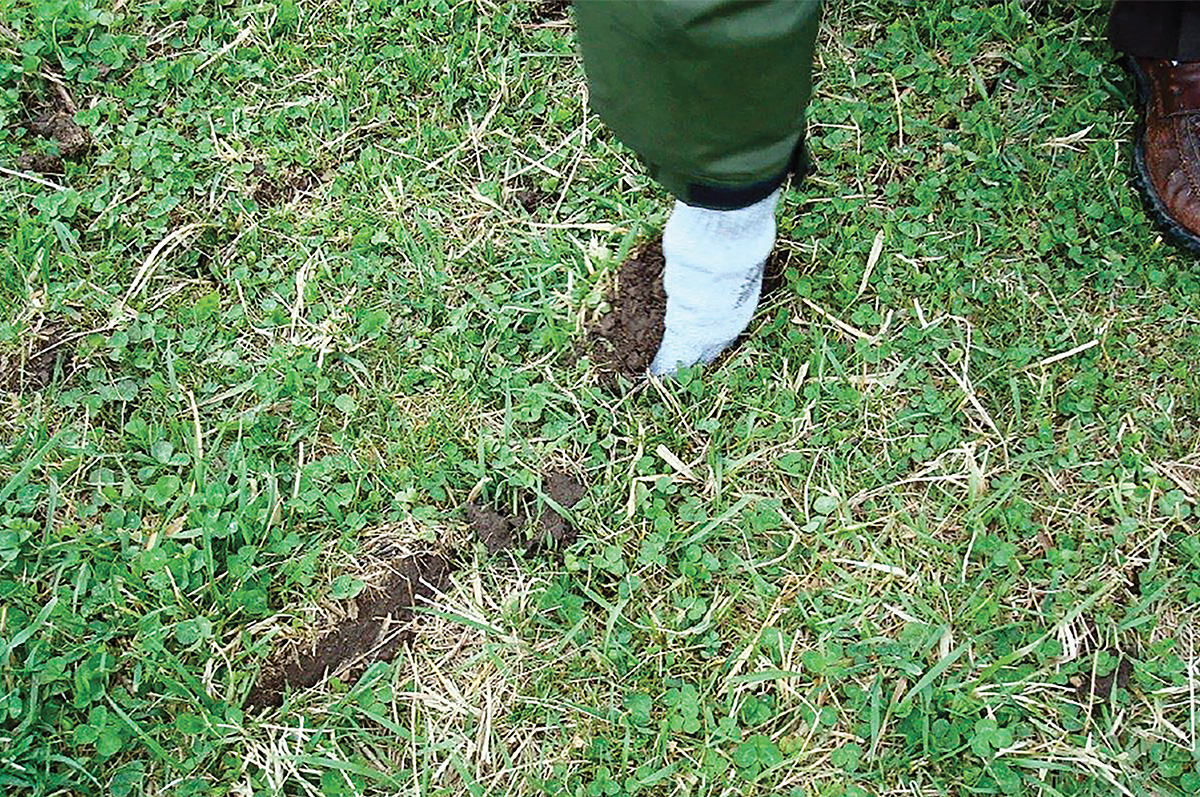 Aerating in the spring when dry soil conditions are present will allow your soils to retain all future spring moisture that arrives; however, finding a dry window in the spring will be your biggest obstacle. Photo courtesy of RanchWorx.

Selecting an aerator that is suitable for your operation and your soil type is very important. Weight and subsequent durability are two of your biggest factors, as without weight, they will not have the energy to make a deep enough fracture. Finding an aerator capable of suiting your soil conditions and operational equipment should be your first step in considering an aerator. Some aerators even can perform tasks in addition to aerating, such as cultivation and brush clearing, as well as renovating Conservation Reserve Program (CRP) ground.

Having a conversation with an aerator manufacturer can ensure that the aerator will perform in your geographical region, which is increasingly important if dealing with hard clay and rocky conditions, as not all aerators are created equally. If you would like to try aerating prior to buying, many conservation districts and counties in North America have aerators in their rental fleets. Contacting your local district is a great way to verify which size of aerator would work within your operation. Some districts even have multiple units in their portfolio, which can help you make an informed decision about aerating the soils in your operation.

Certain soil aerators have the ability to maintain no-till soil practices while keeping a crop in production and, in many cases, increasing yield. For grazing operations, there is value in longer rotational grazing schedules due to the regrowth potential of nutrient-rich moist soils. Although pastures can be the easiest fields to neglect, they also need to be maintained. Understanding that there is more compaction created per square inch by the hoof of a cow than vehicular traffic verifies that we cannot forget about these soils. In many cases, it is nearly impossible or cost-prohibitive to tear up and replant a pasture, but one may consider aeration as a viable way to increase yield and keep the land as a productive pasture.

A major effect to consider when aerating your soil is the environmental conditions at the time, as well as weather conditions that may be on their way. We all know that the weather is in control of most farming operations, and aerating is no different. Aerating in the spring when dry soil conditions are present will allow your soils to retain all future spring moisture that arrives; however, finding a dry window in the spring will be your biggest obstacle.

Many North American regions have seen great success aerating earlier in the spring rather than later in the spring. Aerating in the spring will allow forage crops to be less stressed during a dry summer season, as they will have large moisture reserves on hand deeper in the soil. In many cases, an aerated forage crop will not go to seed as quickly compared to a forage crop that is dealing with compaction.

Aerating in the fall will promote any fall moisture to be absorbed into the soil and will head into the winter with additional moisture reserve, helping promote your spring growth. In regions where freeze-thaw cycles are prevalent, aerating in the fall can encourage the fractures created by the aerator to expand as the moisture freezes within the fracture. Dry soil conditions with the proper aerator will provide the best results, as the fractures in the soil will be larger and go deeper into your soil horizons.

As land prices climb and weather systems evolve, growers are looking for ways to produce more with less and in more volatile conditions. Soil aeration is a tool used to help increase production while maintaining your soils – and although it may not fit into every operation, it is a viable option for taking advantage of whatever Mother Nature decides to send your way.

Founded by farmers that were looking to save time and eliminate costly labor, Maxilator hay handling equipment – Hay Accumulator has grown to become part of one of America’s largest family-owned manufacturers of products.

Northstar Attachments is an innovative manufacturer of specialized tractor attachments and equipment designed primarily for tractors and loaders.