The rally was almost entirely due to fears that a drought in New Zealand will leave them short of product. Those fears were probably overplayed, but it created enough uncertainty in the market to trigger price improvement.

In early February, Fonterra cut its milk production forecast for the season, projecting that output in New Zealand would be down about 3 percent in the year ending May 31. However, based on production growth in the first eight months of the year, volumes would have to be down about 20 percent the rest of the way to fall to minus 3 percent. That’s very unlikely. 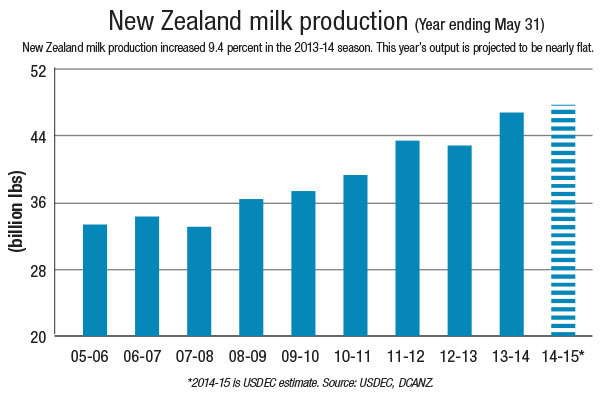 That said, milk production growth from the world’s major exporters is expected to be limited in 2015. Low milk prices have reined in expansion plans, and dryness in Oceania is leading farmers to dry off cows early. Also, it’s difficult to post significant gains on top of the 3.7 percent year-over-year growth posted by the five major suppliers in 2014.

As always, China remains a wild card. Manufacturers are said to still be working down stocks bought in 2013 and the first part of 2014. Imports still haven’t come back; in the last four months of 2014, China milk powder imports were down 63 percent from the prior year – a sales loss of 232,000 tons.

Traders look for China to pick up buying volumes by the second half of 2015. However, the world’s largest importer is expected to buy at more moderate levels than those seen over the last two years.PD

Another record year, despite second-half slowdown

U.S. dairy exports increased by volume and value for the fifth year in a row in 2014, reaching record-high levels despite a slowdown in the second half of the year and more intense competition on the world market.

Exporters shipped just under 2 million tons of milk powders, cheese, butterfat, whey and lactose last year – 2 percent more than the prior year. Total overseas sales were valued at $7.11 billion, up 6 percent. U.S. exports were equivalent to 15.4 percent of U.S. milk solids production, down slightly from the 15.5 percent figure posted in 2013.

Cheese exports were up 17 percent from 2013. Volume was more than triple the level shipped five years ago. Large gains were posted in sales to South Korea (+44 percent) and Japan (+80 percent).

Shipments of nonfat dry milk/skim milk powder (NDM/SMP) slowed in the second half of the year, finishing slightly below 2013 levels. In the first half, NDM/SMP exports were up 13 percent year-on-year; in the second half they were down 15 percent.

Butterfat exports were off 21 percent last year. Sales slumped after April; in the last eight months of the year, volumes were down 57 percent from the year before. 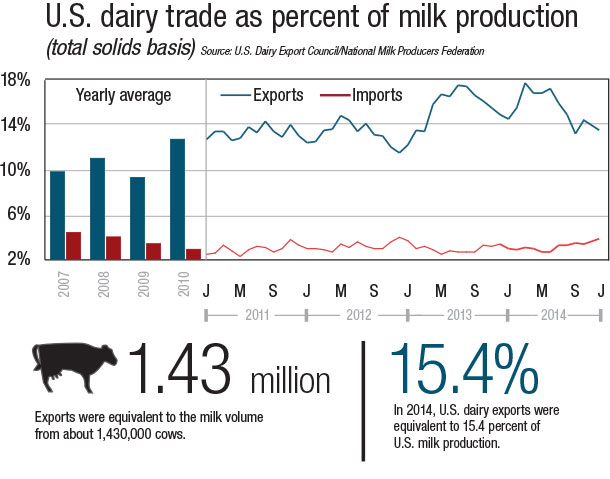 West Coast port congestion made dairy exports extra challenging in the first quarter of the year. Dairy exporters reported significant interruptions in getting U.S. product off shore, in some cases enduring shipping delays of six to eight weeks.

Even those U.S. shippers not caught up in it are still feeling the effects that come from overflowing inventories and customers nervous about U.S. supply reliability.”

Exporters report that some multinational customers have turned to Europe for product because they can’t be sure they can get it from the U.S. in a timely fashion, Suber adds.

“We really need the two sides to come to some sort of resolution because we’re losing sales over this,” he says.

This update is provided by the U.S. Dairy Export Council (USDEC), a non-profit, independent membership organization that represents the global trade interests of U.S. dairy producers, proprietary processors and cooperatives, ingredient suppliers and export traders. Its mission is to enhance U.S. global competitiveness and assist the U.S. industry to increase its global dairy ingredient sales and exports of U.S. dairy products. USDEC programs and activities are supported by the dairy checkoff program, with additional funding from the U.S. Department of Agriculture, Foreign Agricultural Service and from membership dues. For more information, go to the website.