Over the three-year period of 2019-21, the number of Dairy-RP policies sold increased 43%. Participation so far in 2022 has nearly exceeded those in 2021, with more than half the year remaining.

By state, Wisconsin had the most 2021 Dairy-RP policies with 1,466, followed by Minnesota (757), California (488) and New York (377). Participation in 2022, so far, is currently only 156 policies behind last year, with the largest net gains in California (+56), Iowa (+25) and Texas (+11). The geographic distribution of Dairy-RP policies in 2021 found significant concentrations in heavy milk production counties across the upper Midwest and California. Other high milk producing states like New York, Pennsylvania, Idaho, Washington and New Mexico also hold significant participation.

Looking at LGM-Dairy participation and utilization statistics over the past five years (2017-22 to date), Munch said there are few discernable participation trends. Overall, participation in LGM-Dairy shows a fairly stable base of users who have found benefits in using the programs' unique bundle hedging approach under short- or longer-term, highly customizable contracts.

Policies sold ranged between a low of 1,067 in 2018 and high of 1,622 in 2017, with 2022 at 1,355 so far. This represents a fourth of the Dairy-RP policies sold this year. Looking at geographic distribution, 2021 sales of LGM-Dairy were almost exclusively in Upper Midwest states, likely revealing comfort in utilizing Class III milk prices. Wisconsin had the most policies sold with 872, or 64% of all LGM-Dairy policies sold last year, followed by Minnesota (268) and Michigan (118). Between 2021 and 2022, the largest increase in policies sold occurred in Wisconsin (+144) and Michigan (+22), while the largest drops occurred in Florida (-26) and Ohio (-5).

The number of counties with active LGM-Dairy policyholders has declined by about 40% since 2017, although the percent of total U.S. milk production insured has hovered between 0.74% and 1.15% during the same time frame. The 1.98 billion pounds insured this year under LGM-Dairy is only about 0.05% of volume insured under Dairy-RP, with the average volume insured also much smaller at 1.59 million pounds versus 8.6 million under Dairy-RP.

At any one time, Dairy-RP sales are open for as many as five future quarters. Sales close 15 days before the beginning of the quarter. For example, the period to purchase Dairy-RP coverage for the third quarter of 2022 closes on June 15. The market changes daily and Dairy-RP endorsements must be purchased between the CME market closing and the next CME opening.

Dairy-RP coverage cannot be purchased on days when major USDA dairy reports are released that could impact markets, including Milk Production, Cold Storage and Dairy Product reports (see calendar). Dairy-RP is also not available on days when applicable futures contracts move limit-up or limit-down, or on days when Chicago Mercantile Exchange trading is closed due to holidays.

Sales periods for the LGM-Dairy program are open on a weekly basis. Unlike Dairy-RP, LGM-Dairy is available even if a sales period falls on the day of a USDA report. 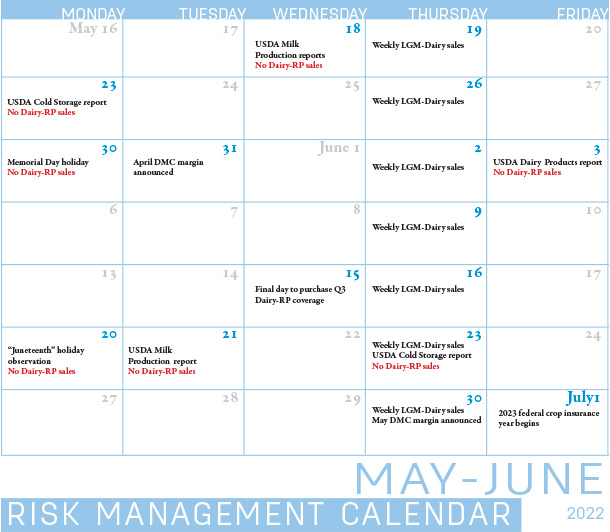 Click here or on the calendar above to view it at full size in a new window.

Dairy producers using the USDA Risk Management Agency (RMA) Dairy-RP program will have an additional income safety net covering milk production losses due to natural disasters, such as a tornado or fire. Other natural disasters that could be included would be floods, severe storm damage or earthquakes.

Under Dairy-RP, producers are obligated to market 85% of the covered milk volume or 90% of the components to receive full indemnity payments. In event of a natural disaster, however, those thresholds may not be reached.

The provision does not insure against the death or other loss or destruction of dairy cattle. Additionally, any impact to herd health that affects milk production would need to be tied to the natural disaster.

Seemingly in a race to the top, record-high milk prices surpassed record-high feed costs in March to help buffer dairy producer milk income margins calculated under the Dairy Margin Coverage (DMC) program. The March DMC margin was $11.55 per hundredweight (cwt), above the top Tier I insurable level of $9.50 per cwt.

The March 2022 announced U.S. average milk price rose $1.20 from February to $25.90 per cwt, a new record high. Offsetting part of the increase in the average milk price were skyrocketing average costs for alfalfa hay, corn and soybean meal.

April’s DMC margin will be announced on May 31.

Monthly U.S. milk production was below year-ago levels for a fourth consecutive month in April, with cow numbers lower than a year earlier and output per cow unchanged.

Read: April 2022 milk production down from a year ago.

The USDA’s monthly World Ag Supply and Demand Estimates (WASDE) report, released May 12, revised the 2022 U.S. milk production estimate upward, with higher milk cow inventories more than offsetting slower growth in milk per cow. With the increased production, the outlook for farm-level milk prices was steady to only slightly lower.

Myers will highlight the latest Class III and IV futures milk price forecasts and share updates on DMC margins and the Dairy-RP program.